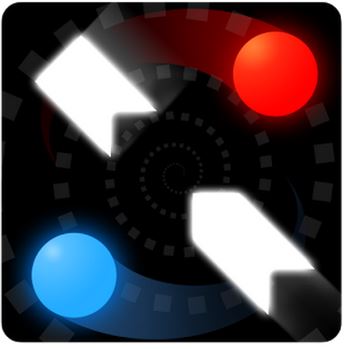 When the good folks over at the Humble Bundle released the Humble Bundle Mobile 6, tucked away was the debut of a game called ‘Duet’. The game is an iOS hit, which has finally come over to Android, even better, it’s a hit game which is made by Australian developers Kumobius.

Duet is a pretty simple game at its core, it’s two dots – red and blue – attached at polar opposites to a rotating circle. The circle maintains its position in the centre at the bottom of the screen and you basically rotate it left and right, so that the red and blue dots avoid objects, by spinning around them, which are falling down the screen. Or as the developers describe it:

Enter a mesmerising trance of co-dependence in Duet. The rules are simple: control two vessels in sync, survive against all odds and keep calm.

Control-wise, the game is simple, touch the left hand side of the screen and the circle rotates to the left, touch the right and it rotates right. Hit any of the objects falling down the screen and you leave a red or blue smear on the object to mark your failing as you try again.

The game has a rocking soundtrack by Musician, Tim Shiel, who some of you may know as a presenter from Double J. He’s an acommplished musician, who just helped another Australian musician Gotye on his second album. The Duet soundtrack alone will keep you going, on and on in the game, it’s pretty nice.

As a nod to the lag between releasing the Android version of their iOS game, Kumobius have done a fine job with building Duet for Android. It works smoothly and all the interactions and intents work nicely, there’s even a nice slide out nav-drawer with settings and more. The ‘More’ also include access to your Google Play Games integration, there’s Leaderboards – I’m not very good – as well as Achievements (39 Achievements to be exact).

The game is free – but there is an In-App Purchase, which unlocks a challenge mode to really up the ante, once you’ve had a bit of a play through the standard game. At $3.00, the price is a little high, but it’s not something most people will baulk at, skip your daily coffee and support a developer. But then, purchasing through Google Play is not the only way you can get Duet at the moment. If you’re after a bargain, you can get Duet, as well as 8 other games for a little under $5 as part of the Humble Bundle Mobile 6 – this also includes a copy of the awesome soundtrack in FLAC or MP3 format.

Duet is a really, really addictive game for something so simple. It’s worth a look, whether it’s through the Humble Bundle or through Google Play, you should definitely check out Duet.