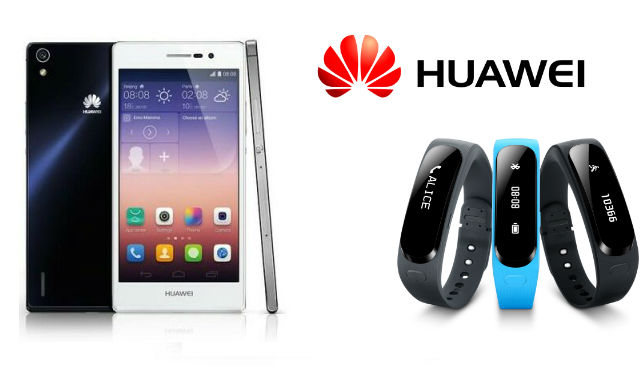 Huawei is a pretty well known brand in Australia and to date their phones have been well priced, though more low to mid-range than higher end, but that ends today, with the launch of the Ascend P7 – their first FullHD phone. To go along with the Ascend P7, Huawei has also announced that their fitness band/bluetooth headset, is also now available as well.

Announced back in May, the Ascend P7 is quite the stunning looking handset. The phone is super slim, sliding in at a mere 6.5mm thin, but in such a slim body, you will also get a fairly massive amount of hardware. The Ascend P7 includes their first 1080P display, as well as an LTE radio, making for a very compelling handset hardware wise, but at $549 it’s also very well priced.

The Ascend P7, includes a fairly impressive camera setup as well. Starting with the rear camera, which is a 13MP Sony BSI sensor with lED flash, that’s a decent start for any phone, but it’s the front facing camera which will really impress. Huawei has again included a BSI Sensor on the front-facing camera, with an 8MP resolution – which Huawei announced was perfect for ‘Groufies’ when it was announced. Without getting bogged down on the name, groufies are a panoramic selfie mode.

The specs on the Ascend P7 include :

The Talkband, was announced all the way back at MWC, but it’s finally making its way to Australian shores. The talkband is an intriguing device which offers a fully featured fitness tracker as well as a Bluetooth headset, in one compact band.

The Talkband offers a curved 1.4″ flexible OLED display with a built-in 90 mAh battery which Huawei claim offers a six days use on a single 2-hour charge. The Talkband is fairly lightweight weighing in at just over 26 grams, but it’s also water and dust-resistant, coming with an IP57 rating.

The Talkband uses Bluetooth 4.1, to connect to Android (and iOS devices) and is available in three colours – True Black, Graphite Grey and Curacao Blue.

The Ascend P7 is rolling in to Harvey Norman Stores from Monday the 18th of August for $549, while the Talkband is available from Dick Smith in-store or through their website for $179. We have both the Ascend P7 and the Talkband on the way for review, and can’t wait to check them out.

Looking forward to the P7 review.

The software/UI and the battery life would be where I would have my doubts.