With the upcoming IFA tech conference in Berlin looming in just a couple of weeks, the leaks will be coming thick and fast. The latest leak from Sony – who are apparently set to announce an Xperia Z3 and Z3 Compact at the show – is that they are looking to expand the Compact branding to their Xperia tablets, with an Xperia Z3 Tablet Compact. 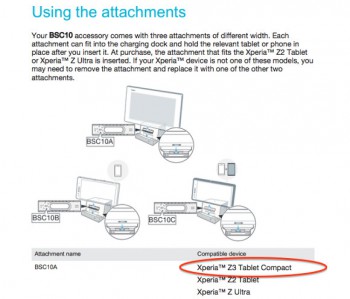 There’s literally no further information about the tablet beyond the name. Sony has already released Xperia Z model tablets, however they’ve been in the 10″ range. Previous efforts, the Tablet S and Tablet P have also been aimed more at the larger screen size, but an Xperia Z3 Tablet Compact, may be their attempt to enter the hotly contested 7″ and 8″ tablet market.

If indeed the table will be announced as part of a Z3 ‘family’ of products at IFA, it should make for an interesting event. We’ll have to wait and see.

That piece of documentation also shows something else important. Sony are using a modular dock system, so all you need is one dock base, and then the right adaptor. So no need to have a complete different dock for each device.