Home News and Editorial iFixt tears down the Project Tango tablet – it’s like a mobile... 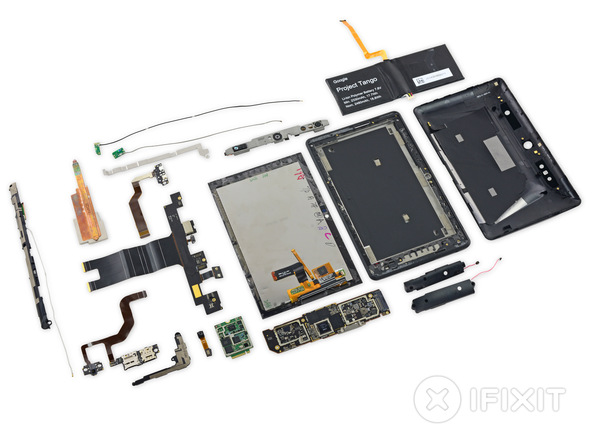 As a development platform with a price tag of over $1000, Project Tango from Google’s Advanced Technology and Projects(ATAP) group isn’t exactly your consumer level device. But even devlopers need to get their dev devices repaired, so the team at iFixit has gotten hold of one and torn it apart to see what makes it tick.

The tablet includes an NVIDIA Tegra K1 processor and 4GB of RAM, 128GB of storage and an Integrated Depth Sensor and cameras on both front and back including a 120° Front facing camera and 4MP 2.0µm Pixel Camera and Motion Tracking Camera on the rear. Repairability, according to iFixit, wasn’t terribly great with the tablet scoring just 4 out of 10. The highlight of the Tablet is the easy to remove back, but it goes downhill from there. The tablet has a large number of cables strewn across the internals, and many of the components are soldered together or not removeable individually, making for more costly and harder repairs.

There’s no tear down video of the Project Tango, but a fair number of pictures and descriptons of parts included over at iFixit. It’s an interesting look at what’s to come, with a consumer level release expected next year. Hopefully with a better repairability rating, we’ll soon see.