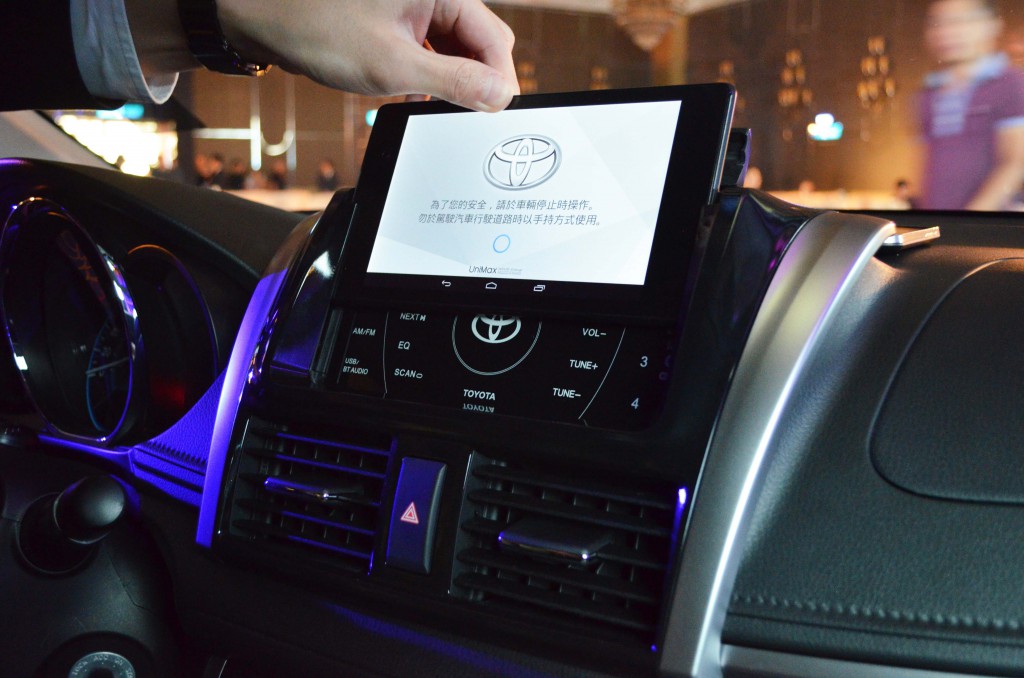 Android integration has already started to make its way into modern-day cars, the next step forward is Android Auto, which should start being introduced into 2015 model vehicles later this year and into next year.

Twenty Five car brands have already signed up to Android Auto and have committed to shipping cars in the future, but Toyota has something completely different in mind — at least in Taiwan.

Partnering with Asus-owned Unimax, Toyota has announced the “Toyota Intelligent System”, which essentially brings a dockable Nexus 7 to select vehicles. The idea is that ‘smart’ infotainment systems are useful, but also tend to go obsolete long before you’re ready to upgrade to a new car. With the TIS, the heart of your experience is within a replaceable tablet. Today it’s the Nexus 7, but in the future Toyota and Unimax could make another newer tablet compatible with the system, provided it has the same overall dimensions.

This isn’t just a stock Nexus 7. It appears the interface has been customized to better fit the in-car experience with customised GPS apps, multimedia controls and more. However, the stock Android experience is still there when the tablet is undocked from the TIS. If you remove the tablet from the dock the TIS will still provide ‘basic’ functions (radio, etc) and it comes with NFC capability to pair other devices (like your phone) with the audio system. At this stage the system has only been announced for Taiwan and it unknown if and when it will be introduced to other countries including Australia. Toyota is also yet to announce which vehicles will come equipped with the technology.

The TIS system is an interesting take on in-car Android integration, but will future tablets be designed to work with it? Only time will tell.

Tesla panel ftw. We need more consumer tablet powered infotainment systems. Not the cheap pressure sensitive shite we’ve been fed so far. I’m happy to pay $500 more for a XpiriaZ or $400 more for a Nexus 7 tablet, when fully integrated in the car. It’s not rocket science. Shit, it wouldn’t take more than a week to do this. With the power of these companies, it’s irresponsible and blatant disrespect to us who know what’s up with the new tech available…

Sexest video wouldn’t cut it for Australian market. Even if it is a pretty accurate portrayal of female drivers. 😛
I am yet to find a car touch screen experience that didn’t suck. We will see if this one can work.

What’s wrong with the video though, is at the 1min 46sec mark. Vehicle warnings are on the tablet. Vehicle warning locations that make you look away from in front of you, is not a good idea.