LG is continuing to tease its upcoming round smartwatch, rumoured to be awkwardly named the G Watch R, with this recent post on the company’s Google+ page teasing a reveal at IFA in early September.

LG’s taken a cheeky swipe at Motorola‘s Moto 360 in their post too, claiming that the G Watch R will be the first wearable to “fully utilize its circular shape”. If true (and if LG can deliver on other fronts), that missing chunk at the bottom of the Moto 360’s screen could well prove to be its achilles heel. Commenters are pointing out the fairly large bezel on the watch’s face though, which is likely a compromise LG’s had to make in order to actually “fully utilize” that circular shape.

I threw the image into Photoshop to bump up its brightness and see what I could see. Lo and behold, the rumoured side button is clearly visible: 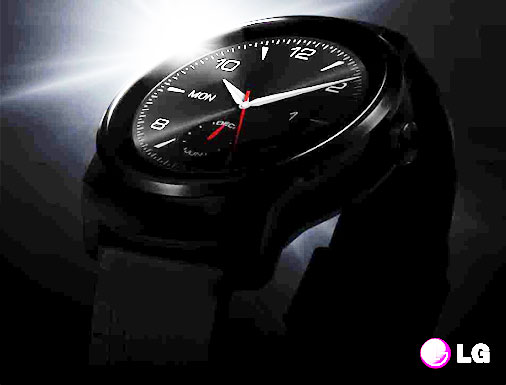 … it also seems from this image like LG’s sticking with the rubbery wrist strap they packed in with the original G Watch too. If so, that’s good news – it’s easily replaced.

It also looks like the G Watch R might have a slightly better design aesthetic, with a few more angles on the watch’s body design hopefully making it a little harder to accidentally catch on clothing. It might also be a little better for folks who dislike the large, chunky watches that have characterised Android Wear since launch.

All will be revealed at IFA! We’re a little over a week away right now, and it seems likely we’ll hear more from LG on the G Watch R (or other friendly leakers) in the meantime.

Are you interested in the G Watch R? If you’re waiting for the Moto 360, does this change your mind? Tell us in the comments!

Ok and when is the Moto 360 going to be released again?? At the IFA?

Done by putting a thicker ring around the screen.
The Moto is thinner and more minimalist.

bugger, now I*’m going to have to wait until this is released before I buy my Moto 360. the moto is still in front based on the teaser video but this image makes the new LG look nicer.

I don’t think I’m going to bother getting up in the middle of the night to watch the moto press conference any more. although someone on google + did suggest I can get the Moto 360 and flip it if I want something else more as there should be sufficient demand to sell it at cost online.

haha i love the dig, so clever… I’m going to replace my pebble with this or the 360 in november when im in the US….

Also i hope they have some metal band options…