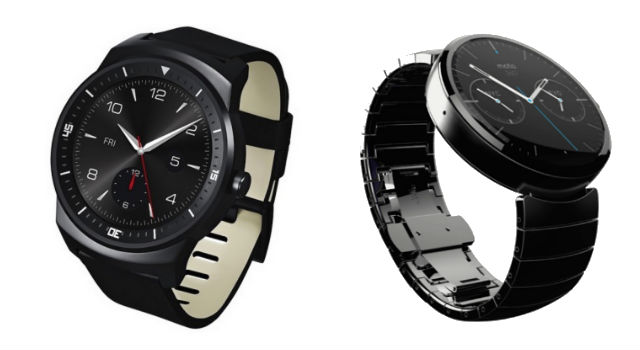 Last time we checked in on which Android Wear watch you were looking at , the Moto 360 with it’s round face design and traditional timepiece-like looks easily ran away with the votes. 65% of you said you were waiting for Motorola’s watch to be released before pulling the trigger on Android Wear, telling us it was either the circular design or the more traditional style you wanted.

After today’s announcement of the LG G Watch R, we thought we’d re-visit the poll and see whether your feelings towards the Moto 360 are changing — from our chats amongst the team, it’s fair to say ours are starting to.

The Moto 360 is expected to be announced on the 4th of September, with a release to the public – at least in the US – following soon after. It may not make it to our shores until Christmas though, which would tie-in with the launch of the G Watch R, sometime in Q4 this year.

What’s interesting to us is the screen technology in both watches. The Moto 360 famously has the slight wedge at the bottom of the screen, making it actually not-quite-360-degrees (some have nicknamed it the “Moto 320”). Motorola says that’s where the electronics for the screen are housed, which seems fair enough – if a little disappointing. The G Watch R however has no such wedge, making its screen the full “real deal” 360 degree round screen even if the bezel around the watch face is slightly more pronounced. If you’re going to buy a smartwatch with a round screen, you probably want the full circle. Advantage LG?

Another differentiating factor is that the Moto 360 will have an ambient light sensor, making for pleasant viewing in outside areas where the LCD can be harder to read without the brightness pushed to full. The lack of ambient light sensor and automatic screen brightness adjustment has been a complaint levelled against the G Watch and Gear Live, and it’s possible LG will include the sensor in its second pass at Android Wear … but it hasn’t been mentioned so far.

How about a spec comparison? This is pretty incomplete because Motorola hasn’t actually detailed the Moto 360 just yet, so it’s based mostly on what was pulled from the Best Buy website leak.

Over to you, readers – which round smartwatch will be sitting on your wrist as we head into the silly season? Will you buy the G Watch R or the Moto 360 … or will you perhaps stick with the G Watch or Gear Live? Tell us more in the comments!

will the moto360 be even available in australia? lol

I was all for Moto 360 until I saw the images for the Asus branded Android Wear watch.

Has to be the fixed v2 version (ie actually fully round) of the Moto. The winning thing for the Moto is the modern aesthetic, not just the roundness. The LG looks like a $20 Kmart watch by comparison.

But the missing wedge makes the Moto look like a kickstarter prototype – ran out of funding. Moto has really dropped the ball here and given apple a chance at releasing the first desirable smart watch.

It’s very close and both look great but my vote goes to LG’s effort. The perfectly round display is the match winner. That said, this is just the tip of the iceberg. Neither of these two watches will hold a candle to the competition in a year’s time (or perhaps even less).

My vote goes to neither.

I’d prefer OLED on the LG, I also like the smaller screen (smallish wrists). That said, I prefer the plainness of the 360’s case and what’s this with a plastic face on the LG? I no longer buy watches with glass or acrylic faces because of the scratching. I’m happy to wait a year or two for better battery, more matured Wear software, nicer hardware and sapphire glass as standard.

Yes this, Having such small wrists I’ve been worried the 360 would look huge.

I can’t understand everyone’s infatuation with round faces. These things don’t have physical watch arms but you are openly willing to forgo significant screen real estate to make it look like ones that do. I love my Galaxy Gear for the OLED. I easily get 2 days out of it as long as the screen is not permanently on (second day now and still 30 percent remains). I am going way out on a limb to say that I believe in 4 years 90 percent will use non round screens on android wear devices. No one uses round screen phones,… Read more »

I don’t have an infatuation with round screens (I do own a couple of nice rectangle watches after all), it’s just the fact that the Moto 360’s bezels are barely there compared to the LG and Samsung watches. If Samsung, LG or Sony release a rectangle smartwatch with tiny bezels and non-plastic case, we can have this conversation again. Until then it’s Moto 360 all the way.

Guessing you’re too young to remember calculator watches. I don’t think anyone of my generation can look at those square plasticky watch-faces without cringing a little.

Yep, even myself (a 17 year old) cringed and broke a little inside when the watches were square, but now that 2 are round my heart is repairing a little bit.

I can easily look at those square plasticky watch-faces without cringing a little.
Calculator watches had narrow rectangular faces taking up one quarter to one third of the front space, the rest was all the tiny buttons.
The more squared faces were the preserve of digital sports watches.

A Gear S with Android would work for me. The curved display actually make sense, finally.

Picking the LG because it has a full circle display whereas the missing bit on the bottom on the Moto was starting to bother me.

I have been eagerly awaiting the Moto 360 thanks to the round face. I didn’t know it housed a TI processor and this makes me wary. I had the Galaxy Nexus that lost support after 18 months because of TI. I prefer OLED over LCD too so LG have really thrown a spanner in the works! I’m leaning almost towards LG, however since the 360 is waterproof this another plus for the 360. The key for me is more useful features and hard-wearing. Being touch screens, scratches will impede usability, thus perhaps it’s best to wait for sapphire crystal displays?… Read more »

I don’t understand… I believe both have a heart rate monitor (despite Ausdroid failing to mention it in the LG specs). Neither is waterproof but both will have basically the same level of water resistance as each other?

My apologies Dan…I didn’t realise that was the initials for the technology. Aren’t they both the same technology though? I was just checking column to column for the differences

I did think everyone knew this – but the incredulous look my wife just gave me indicates that no, everyone doesn’t. I’ll update to reflect this.

So it’s confirmed both have heart rate monitors (If one table says Heart rate monitor and the other doesn’t one would think it doesn’t have it, but that’s only because I didn’t look up what PPG stands for) ..So this news makes it more or less level. Also Greg you’re right about the water resistant vs waterproof… Moto 360 is only ip67 water resistant. Making the LG the more likely candidate because it’s got OLED. So the only thing that will be worth checking is battery life and build quality.

LG without the diver’s bezel would be ideal IMO. Dunno how the P-OLEDs will hold up though, this first round of watches using them will be interesting. The size of the 360 is a bit off-putting, and the slice out of the screen is a real detractor.

Edit: If neither lasts two days of normal use without charging then I wont be getting either. One thing I demand in all my portable technology is what I consider decent battery life and I wont compromise on that point.