Nokia’s devices section has been sold to Microsoft, meaning we won’t be seeing a new Nokia branded phone for a while. Their software section however remains in Finnish hands and one of the best parts of the software division is Nokia HERE Maps. HERE Maps is right up there with Google Maps as one of the better mapping products available, and it’s coming to Android – albeit as a Samsung exclusive.

The app will be available for Samsung Galaxy phones as soon as Samsung’s latest smartwatch, the Gear S – a Tizen powered self-contained 3G enabled smartwatch – is launched. HERE maps offers an array of features, including a big seller for travellers, Offline Maps. Google Maps offers the ability to download maps for offline use, however they are generally limited to a city or smaller region; HERE Maps allows you to download maps for an entire country. 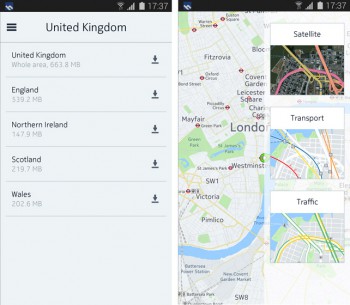 Nokia offers walking, driving and public transport directions as part of HERE Maps, with the ability to avoid toll roads and set up to three alternate routes. You can even see nearby places like restaurants, theaters and more using the search function. Nokia has also included Glympse functions to share your locations with friends or family.

HERE Maps offers maps for over 200 countries, with walking and driving directions in nearly 100 of those. You can get traffic information in 40, as well as transit maps and directions in more than 750 urban areas. HERE Maps will launch when the Gear S goes live in markets around the world in October.