Home Smart Home and Wearables Around the Home Google to add minimum & maximum bitrate support as well as 1080P... 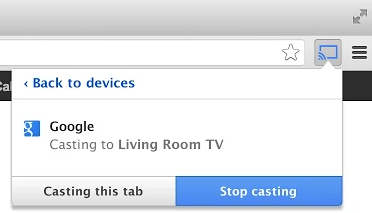 Google is continuing to improve their Chromecast extension, offering better tab-casting features slowly, but surely. They’ve called on Chromecast users previously to get Tab Mirroring improved, and now you can try out some new features – if you’re willing to use the Google Cast Beta extension.

The announcement, made by Googler Mark Scott over on the Chromecast forums, shows that there’s a number of new features in the new Beta Google Cast extension. Google has added support to specify minimum and maximum bitrate on tab casting, as well as support for 60fps casting and setting resolutions to as high as 1920×1080 (previously you’ve only been able to cast 1280×720).

Minimum bitrate – This is the minimum amount of bandwidth that will be used when casting a tab. Setting a lower value allows Cast to scale down the use of your network when it detects congestion; this reduces visual quality, but it’s generally preferable to stuttering.

Maximum bitrate – This is the maximum amount of bandwidth that will be used when casting a tab. Cast will try to scale up to this bitrate if it detects that your network is capable of handling it. Higher values will make what you see on Chromecast look closer to what you see in your Chrome tab, though we’ve generally found that values above 4000-5000 have diminishing returns. It all depends on the content that you’re watching, though, and the resolution you’re casting at.

Maximum capture frame rate – This controls the maximum number of frames that Cast will capture per second. The default value of 30 normally makes sense, as there’s very little content that’s greater than 30fps – but with some 60fps content starting to appear, you can experiment with higher values if this appeals to you. Note that you’ll need a fairly capable system to handle 60fps, and that selecting 60fps *and* 1920 x 1080 at the same time is not supported. 60fps is the maximum possible value.

Resolution – This controls the resolution of the video stream sent to Chromecast. Until now, the built-in settings (Standard, High, and Extreme) only enabled 854 x 480 and 1280 x 720 to be supported. If you’ve got a powerful computer, you can now push this up to 1920 x 1080. This can also work well if you use tab casting primarily when browsing the web, or for viewing photos, where detail is more important than smoothness. Note that while it’s always tempting to run at the highest settings, if your computer’s display is lower than 1920 x 1080, you’ll get little benefit from choosing this setting.

This is all experimental stuff, so, it’s all in the Beta channel at the moment. To try it out, you’ll need to uninstall your current Google Cast extension first. Then install Chrome Beta and add the Google Cast (Beta) extension from the Chrome Web Store.

Google is looking for feedback on these features so if you encounter issues use the “Send feedback…” option in the Google Cast (Beta) extension, by checking “Automatically send Cast extension usage statistics to Google”. Remember you can always switch back to pre-defined levels if it’s not working too well.

We’re keen to try this out and see how it goes. If you’re on the Google Cast (Beta) track already, let us know what you think.