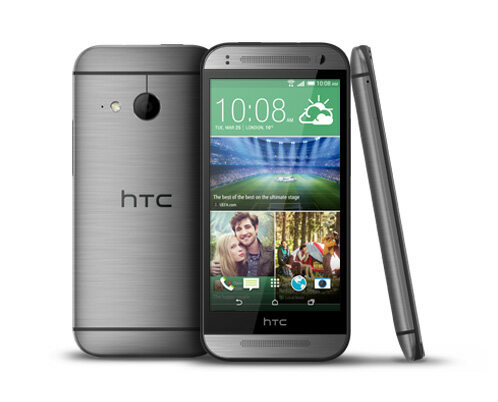 HTC has today announced that they will be releasing the HTC One Mini 2 on the Telstra network.

With the Mini name, so too comes the mini specs. There’s not too much of an update hardware wise with the HTC One Mini 2 from last years model, featuring the same Qualcomm Snapdragon 400 processor, although at 1.2GHz instead of 1.4GHz (that’s right, it’s clocked slower) and there’s still just 1GB of RAM included.

There has been a bump in some specs though, the camera, is now a 13MP BSI sensor over the 4MP Ultrapixel Camera on the previous model, you also receive a microSD Card slot to expand your storage. There’s also a larger battery to hold you over, perhaps with a larger battery and slower CPU, there will be a corresponding bump in battery life.

Software wise, you’ll receive all the HTC Sense goodness that comes with a HTC phone. Blinkfeed and HTC Zoe are included, as are the wonderful BoomSound speakers on the front of the phone.
HTC One Mini 2 Specs:

The HTC One Mini 2 joins the Samsung Galaxy S5, and the HTC One M8 as compatible phones for the new 700MHz Telstra network, which will launch on January 1st next year. If you’re in a compatible area, which so far includes Perth, Fremantle, Esperance, Mildura, Mt Isa and Griffith, with Sydney and Adelaide going live this month, you could also be trialling it out right now.

The One may be HTC’s flagship device for the year, but the mini 2 is a more approachable handset thanks to its reduced footprint, lower price point, and compelling performance/value.