While there’s a few deals around that beat Google’s $249 (+ shipping) price for LG‘s G Watch, Google’s striking back and offering $100 off the combined price of a “power couple” – a G Watch and a Nexus 5 when purchased together in the same transaction on Google Play. As a bonus, we get to see an extremely cute picture of the Nexus 5 and G Watch together (shown above).

There’s a little bit of a sting in the tail – that $100 saving gets eaten into by the combined shipping price of $39.95 for the watch and phone together, bringing the total price to a shade under $588 (for a 16GB Nexus 5): 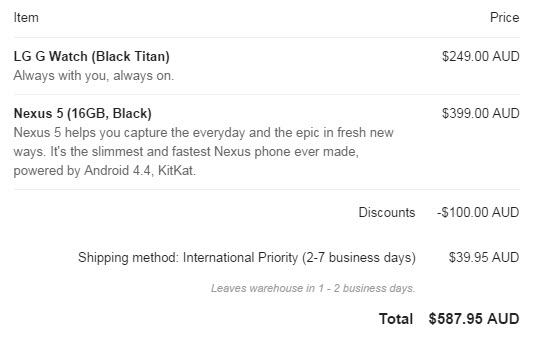 Still, if you were thinking of buying both the devices from Google Play anyway, this might give you an incentive to do so sooner rather than later.

It’s not clear when the offer ends, but if you head over the Google Play pages for both devices, you’ll see the promotion shown on each page. Get ’em while they’re hot!

Have you found a better deal? Let us know in the comments!

Google should just drop the price of N5 now, so that I could get the refund…

Good deal, but bit late now to get either devices.

Love it. But we are in a strange time. Got to see what is coming.