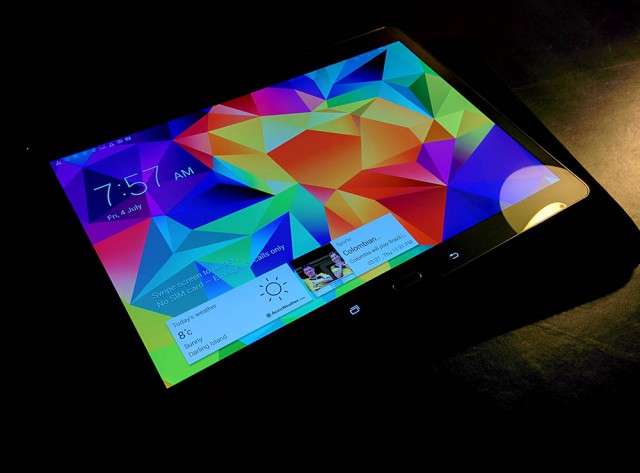 Vodafone has today announced they will be bringing the 4G enabled Samsung Galaxy Tab S 10.5 to their network on a range of 12 and 24 month plans.

The Samsung Galaxy Tab S 10.5 4G is available from today in white, on plans, or outright from Vodafone stores or online. Plan wise, there’s a range of options on the Vodafone website on 12 and 24 month contracts.

Hardware wise, it appears that Vodafone has bucked the trend and gone with the Exynos 5 Octa-Core processor which is based on ARM’s big.LITTLE architecture and includes a 1.3 GHz Quadcore processor for the run-of-the-mill work, while a 1.9 GHz QuadCore processor steps in for the heavy lifting.

The tablet is ultra-thin, measuring just 6.6mm thick and very light, weighing in at a just 467 grams. The tablet includes the 10.5″ SuperAMOLED display which features 100,000:1 contrast ratio and true-to-life colour reproduction which covers more than 90% of Adobe RGB color coverage – in other words, it’s a great screen.

The tablet is compatible with the Vodafone 4G network which is one of the fastest we have here in Australia. Vodafone is also planning on investing $1 billion in its network this year to achieve what they believe is the fastest and most advanced LTE network in Australia. This means the Galaxy Tab S 10.5 is compatible with the existing 1800MHz network, as well as the 850MHz spectrum which will be refarmed as LTE, in a bid by Vodafone to cover 95% of the metropolitan population by the end of the year.

Had a play around with one today. Same “perforated” design on the back similar to the galaxy S5 feels nice. Bronze/gold metallic bits are a nice touch. Screen is impressive. Performance is smooth. Touchwiz annoys me. Finally replaced the menu key with the previous apps key and it’s still on the wrong side. Keys off screen in general annoy me.

Come on.. LTE version which Vodafone is selling have Snapdragon instead of Exynos from Wifi version.
Also second table must be referring 24months contract..

It says the Exynos version on their site. Feel free to jump on over to check the specs.

Well, we are Ausdroid, not Telco. They are dumb.