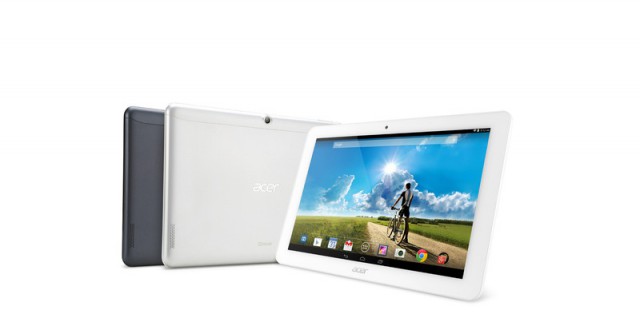 Acer is expanding its Iconia series of tablets with the company announcing at IFA the Iconia Tab 10 and the Iconia One 8.

The Iconia Tab 10 is, as the name suggests, a 10″ tablet featuring a FullHD IPS display with Corning Gorilla Glass to provide a scratch resistance surface. Powered by a MediaTek quad-core processor, the tablet also includes a micro-HDMI port, WiDi capabilities and comes running Android 4.4.

At this stage, Acer has only released US availability, advising that the Iconia Tab 10 will be available later this month for US$199US.

The second device Acer announced was the Iconia One 8. A strangely named device, but which follows on from the Iconia One 7, released earlier this year.

The Acer Iconia One 8 tablet will feature an 8″ 1280×800 resolution display, powered under the hood by an Intel quad-core Atom Z3735G processor. With a slim profile with a thickness of 8.5 mm along with a textured back, the Iconia One 8 is going to be a colourful series, with Acer planning on releasing 10 colour variations, although the colours available will vary by region.

In a departure from recent releases, which have seen their tablets launch with quite often very old versions of Android, the Acer Iconia One 8 is running Android 4.4 right out of the box. Acer have advised that the Iconia One 8 will be available in the Europe Middle East and Asia regions from October with prices starting from €149 (Approx $209AU).

We’re not sure if or when the Acer Iconia Tab 10 or Iconia One 8 will be making its way here or what price they will carry if they do. We will be in contact with Acer for more information about arrival dates and prices.