Tonight, at IFA in Berlin, Sony has begun their raft of announcements by concentrating on the hot topic of the tech industry – wearables. As rumoured, Sony launched an updated SmartBand called the SmartBand Talk, as well as their first Android Wear watch the SmartWatch 3.

Both the SmartBand Talk and SmartWatch 3 will both connect with the Sony Lifelog app, which logs all aspects of your life, giving you a complete journal of your digital life.

An integrated accelerometer and altimiter in the SmartBand Talk will track your movements, which will sync with Lifelog to record your daily physical activity, from step count to other activities like running, or climbing. All these stats will be available on the e-paper display, which will also show notifications from your phone, as well as the time at a glance.

It’s waterproof, so you can go swimming with the Smartband Talk without worry. With an IP 68 rating, the Smartband Talk is Dust Proof, as well as Waterproof for extended periods of time. The SmartBand Talk will come in a range of ‘extra vibrant colours’ later this year.

Despite announcing that they would continue with their own smartwatch platform earlier this year, Sony has released the SmartWatch 3 with Android Wear installed. 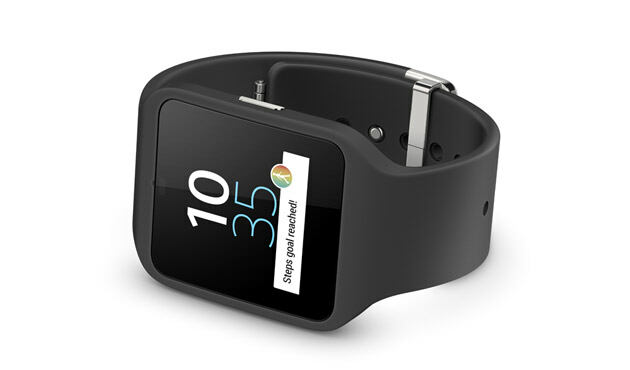 The SmartWatch 3 includes the same Android Wear functionality we’ve come to expect, showing notifications, as well as other useful data such as appointments, weather information and messages. The Smartwatch 3 will also be integrating with the Sony Lifelog app, uploading step counts and more to the app to complete your life journal.

The hardware for the Sony SmartWatch 3 will be available in two colours – “Classic” Black “Sport” Lime, with Sony releasing White and Pink coloured straps after launch. The Smartwatch 3 will include a 1.6” 320×320 TFT LCD Transflective display which Sony says will be great for visibility in bright sunlight. On the back will be a stainless steel back panel which Sony feels will add a more premium look and feel to the watch.

As well as the built-in microphone, and Accelerometer, Compass, Gyro and GPS sensors that other Android Wear watches have contained, the SmartWatch 3 also has some new hardware featuers. The SmartWatch 3 is the first Android Wear device to be announced with GPS, as well as Bluetooth compatibility and 4GB of storage you can store music on. This means you can track your run, while listening to music through Bluetooth headphones – a truly versatile fitness watch.

Sony advised that the SmartBand Talk and SmartWatch 3 will be launching later in Autumn – we’re assuming Spring down in the southern hemisphere – 2014.
Update:
Looks like Sony Australia is definitely bringing their new wearable range to Australia advising :

Sony Mobile Communications Australia will announce details on local pricing and availability closer to the launch of the latest SmartWear range.

Being able to store a bit of music on this and play without a phone is interesting… You’d think Sony would have announced some shiny new Bluetooth headphones to go with this?

Still not quite convinced I need a smartwatch yet though… I happen to like getting my phone out at every opportunity! 🙂

That, and voice control has always been hit and miss for me, so I can’t see myself using a similar built around voice and very simple swipes…

Possible small correction for the article, I’m not aware of any android wear devices that have GPS sensors, some other websites are claiming this is the 1st smart watch with a GPS sensor so I’m not sure if the statement ‘GPS sensors that other Android Wear watches have contained’ is accurate?

I was wrong, and never more happy to be so! I really didn’t think this would come with android wear.