Motorola has had a pretty big day, launching three major new products, the new Moto X and Moto G, as well as their long awaited entry into Android Wear, the Moto 360. But that’s not all, as teased on their press invite, they also had an accessory to share with everyone – the Moto Hint and Moto Power Pack Micro.

The Moto Hint leaked earlier today and is a discreet wireless earbud, which connects via Bluetooth to your handset. The Moto Hint allows you to use the voice controls on your Motorola phone, as long as it’s within range of the headset. But it’s not just for Motorola phones, you can also use it as a normal Bluetooth headset with any Bluetooth enabled smartphone. 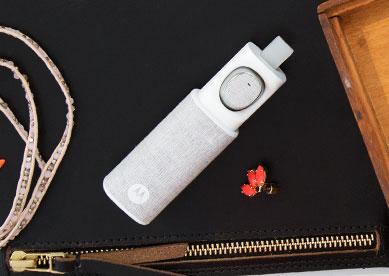 The Moto Hint will give up to 10 hours of talk time, but will come with it’s own charging case, which will give you two complete power recharges on the go if you need it. From the video released, Motorola Keylink appears to connect to your phone using Bluetooth and offer two way communication, which lets the Moto Power Pack Micro act as a keyfinder, or phone finder, depending on which device you have in your hand.
Moto Power Pack Micro

Motorola Australia has not announced any local availability for either the Moto Hint or the Moto Power Pack Micro. Motorola US has advised that the Moto Hint will be available in the US this ‘Fall’, and will expand to other regions by the Holidays, so we hope to see it launch with the Moto X. The Moto Power Pack Micro will be available in the US today, but no mention of expansion to other regions has been announced.

Price wise, the Moto Hint will retail for US$149.99, while the Moto Power Pack Micro will cost US$39.99 – we hope that a corresponding ‘Australia Tax’ isn’t levied on either, but we won’t hold our breath.

The power pack find my phone & keys thing is brilliant!

when can we get the power brick in australia?

When Lenovorola decide that we’ve been waiting long enough.
If we’re lucky, maybe we’ll see it a short while after xmas, when US demand has dropped, and they want to shift unsold stock.