Home Tablets, Laptops and Chrome 7-inch Google tablet hits the FCC with Nvidia Tegra inside – could... As Nexus rumours go, this one’s a little confusing. Droid Life reports that a new Google device that looks to be a 7-inch tablet hit the FCC last week for certification, with Nvidia Tegra chips and a phone-sized battery inside.

The FCC exhibit identifies the device as 7″ Tablet with designation A4R-NX74751. There’s a confidentiality request around the Block Diagram, Schematics Diagram and Parts List, so we won’t get a look at the details until Google’s good and ready. The listing is dated September 4, 2014, although SAR reports are dated July 2014.

What we do know is that there’s an Nvidia Tegra chipset of some kind powering the device, and LTE connectivity on bands 2, 4, 5, 7 and 17. Of more concern is the relatively small LG-made battery inside with a capacity of 2480 mAh. That’s an issue – it’s smaller than some 5-inch phones, and this is a 7-inch tablet.

The FCC label (below) also lists 7361A-E1729 and VOB-E1729. These appear to be references to Nvidia LTE connectivity. It also includes the new slogan “Built for imagination” (followed by “Made in China”) – that’s new. 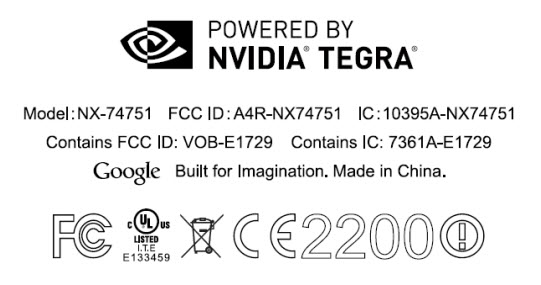 While there’s a rumoured Tegra-powered Nexus tablet coming soon, it feels like this isn’t likely to be that tablet. It could however be another well-known project – Project Tango, Google’s 3D space-mapping tablet that was first introduced at Google I/O, taking over from the project’s original smartphone form factor.

It’s about time for the Tango tablets to hit developers’ hands, and it might also explain Google’s reluctance to make everything known about the device’s internals.

Curious for more? Start your speculation engines! Head over to the FCC listing and see if you can find anything else.

What do you think this mysterious new 7-inch tablet might be? Tell us in the comments!

So it would suggest they are playing with the voltage produced (for some reason) and the power storage is slightly more than the N7 2013.

Hoping this isn’t the 2014 Nexus tablet.

Was really looking forward to those HTC made Nexus 9 rumours to be true.

Don’t worry, there have been so many independent leaks it’d take something like HTC going under to stop it.

That would make more sense, but you’d hope the FCC doesn’t make typos. 😉