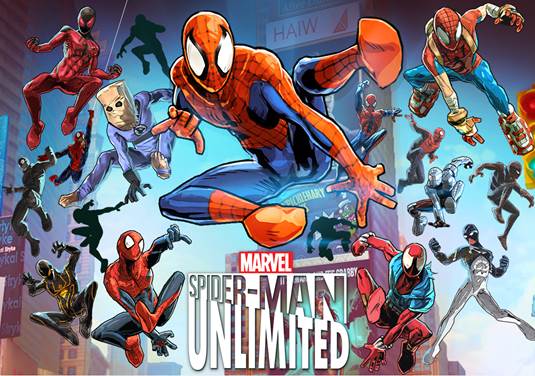 Gameloft has seen some success with the last two movie tie-in games for the Amazing Spiderman, but today’s release won’t cost you a cent to try out. Gameloft has followed their usual freemium model and released Spider-Man Unlimited into Google Play for Free, with the usual ‘Offers in-app purchases’ addendum.

The game contains a cell-shaded graphic style, which lets you take on the role of Spiderman in an endless runner style game, that Gameloft are calling an ‘arcade web-runner’. Spider-Man Unlimited contains a narrative to go with the game, with two issues containing different villians – The Green Goblin (Issue 1) & The Vulture (Issue 2) – to choose from, with a third issue coming soon.

There’s three modes to choose from: Story mode, with 5 boss battles and 25 missions per issue. Event mode, to level up and earn rewards in daily or weekly events and finally endless runner mode.

A host of characters from the Spider-Man universe make an appearance in the game, including Nick Fury, Mary Jane, and Black Cat) and all the villains you could want, including The Sinister Six who drive the endless runner.

The killer for me is the inclusion of the different variants of spiderman included (with more promised to be on the way). You’ll see Spider-Man Noir, Iron Spider, Cosmic Spider-Man, Scarlet Spider, and the Bombastic Bag-Man – but as soon as Spider-Man 2099 appears you have my money Gameloft.

The trailer lays out the game for you, so check it out and then head on over to Google Play to download it, it’s available for devices running Android 4.0 and above and clocks in at 21MB.

Dan, I still have all my old copies of the year 1 comics of Marvel 2099. From that Marvel universe, I liked Doom 2099 the best.

I’ve been considering getting the appropriate Android comic apps and getting digital editions on my Aldi tablet.
How well do the digitals repro the foils and prismatic covers some issues sported?