During the Google I/O keynote this year, one of the larger announcements for ChromeOS was the upcoming ability to install Android apps on Google’s desktop OS. Exactly when Android apps for ChromeOS would arrive wasn’t announced, but according to the Verge, that day has come.

Four apps are scheduled to arrive in the Chrome Web Store today. One of the first apps will of course be Vine, which Google showed off during the demo at the keynote. Other apps that will arrive will be Evernote, as well as language training app Duolingo, as well as a children’s sight card app – Sight Words. 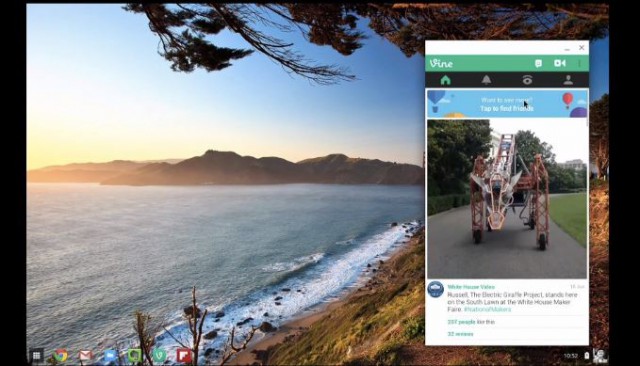 At this stage, it’s a slow process to get apps working on ChromeOS, Google advised that these first four apps are using what’s known as ‘App Runtime for Chrome (Beta)’ but Google would like to ultimately streamline the process, offering ways for devlopers to bring their apps to ChromeOS with ‘little to no engineering effort’ beyond tweaks to the interface. At this stage however Google is working with individual developers to bring their apps over.

Installing the apps from the Chrome Web Store, will require the App Runtime for Chrome (Beta), to be installed also. Install any one of the apps and you’ll see a popup appear telling you the runtime has been installed. After that it’s smooth sailing.

Google asked users to suggest apps they would like to see running on ChromeOS via a webform, soon after announcing the capability was coming.

Arranging to port apps from Android to ChromeOS certainly shortcuts the problem of trying to convince developers to develop packaged apps for their platform, something most have been loath to do so far. It’s a start, but some more variety would be appreciated. Google has said that more Android apps will be coming across to Chrome OS in the “coming months”, until then we enjoy what we can get.

Which apps have you suggested to Google should come to ChromeOS?