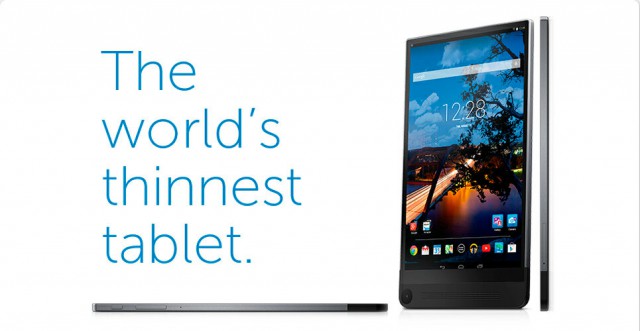 The Intel Developer Forum (IDF) is always good for a couple of tidbits, the most sexy is the new upcoming tablet from Dell, the Dell Venue 8 7000 – or as Dell like to refer to it, the worlds thinnest tablet.

As it’s an Intel event, the tablet obviously runs an Intel processor, in this case it’s an Intel Atom Z3850 quad-core processor clocked at 2.3GHz, it will come with 32GB of storage and a microSD card slot.

It’s a smallish tablet, with a speaker sitting down the bottom beneath the 8.4″ 2560×1600 resolution OLED touch display, mounted atop a gunmetal-grey aluminum chassis. The non-symetrical nature of the speaker upsets the lines a little, but it still looks great, with the edge to edge, almost bezel-less design.

The tablet includes an 8MP rear camera, as well as two others which are used to run the Intel RealSense Snapshot Depth Camera software. Something that allows you to achieve depth of field effects similar to a Lytro. Dell themselves describes the feature as :

Make your pictures pop with depth mapping, measurements and 3D editing. Every memory is arranged automatically with smart albums so all your special moments are in one place.

The tablet hasn’t been given a price tag as yet, and we’re unsure as to whether Australia will see the Dell tablet, given we’ve yet to experience many Dell branded Android tablets here as yet. Given how darn good it looks, we were straight onto Dell Australia about availability and if we hear anything we’ll certainly update.

Lol guys, mentioning something as the world’s thinnest but omitting that very stat is almost quite as pointless really. By the way, it’s 6mm thin (vs former champion Xperia tablet Z2’s 6.4mm) according to the Gizmodo link. Sleek, but the lopsided bezels are however quite off-putting.

Did they say how thin it is?

Hmm, that’s a nice tablet. Hope it comes to Australia.