Android One is launching today, with Google holding an event in India which begins at 4:30pm AEST. There’s three phones built around the Android One reference platform being announced from Karbonn, Spice (whose phone we saw yesterday) and Micromax. When the phones will go on-sale will be announced this afternoon, but from a tweet from Amazon.in, we know at least the Micromax phone will be on-sale tonight.

As shown above, the tweet carries the Amazon and Micromax logo, and shows a line drawing of a phone looking very much like the handset shown off at Google I/O, where the Android One platform was announced. 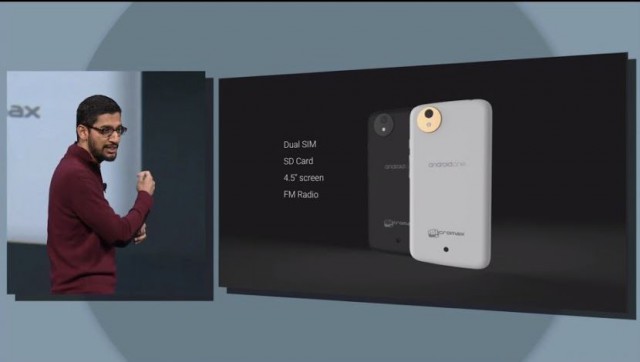 The slide shown off at Google I/O also carried the specs which we saw mirrored in the leak from Flipkart, which released details and photos of the Spice branded Android One handset. The specs of the Spice branded handset are expected to be mirrored on the remaining two handsets – hence the phrase: reference platform. Specs from the Spice handset included :

With Amazon retaining an exclusive on the Micromax handset, it appears that the Android One handsets could be sold in exclusive deals. Yesterdays leak showed Flipkart exclusive software included on the handset, meaning the phone could remain only for sale from that retailer. The remaining Karbonn branded handset could possibly go to another online Indian retailer: Snapdeals, who sell a vast number of Karbonn branded handsets.

Whether the event will be live-streamed is uncertain at this time, but We’ll know a lot more about Android One and the handsets available this afternoon.