After being disappointed by Motorola.com at 2am on 6 September and failing with Google Play and Best Buy, my last option was to pay the premium and get one on the US eBay site – and I went there because prices were inflated to $500+ on the International site with overseas shipping. I bought with domestic shipping and had it delivered to my ComGateway address. I paid AU $40 for Express shipping from ComGateway to Sydney.

After watching my shipment tracker all week, my Moto 360 finally arrived yesterday – about 3 weeks earlier than any other importers seem able to supply, and in the end it wasn’t all that much more expensive. The packaging is round, just to reinforce the fact that the Moto 360 is also round. After watching the video of the poor guy in Perth dropping his brand new iPhone yesterday, I was extremely careful when lifting off the lid. Front and centre was the Moto 360.

I bought the black Moto 360 because I thought it would make the small black wedge at the bottom of the screen stand out a little less – plus, it’ll go well with my Pebble Steel Black band which arrives next week which apparently fits well. My first impression of the Moto 360 was that it’s light and slick. It’s slightly thicker than I expected, but not at all too large – I’ve seen bigger watches.

It sits very comfortably on my wrist, and since it’s so light it’s actually pretty easy to forget that I’m wearing it. When I fit the new Steel band it’ll add some weight, but for now the leather Horween band is very comfortable.

With that out of the way, I turned my attention back to the contents of the box, which includes 2 booklets (whoopee!), a USB cable with a US plug, and the wireless charging dock. It was time to turn the watch on. I held the power button in and started to stress a little when nothing happened after 15 seconds. Eventually, it turned on with about a 30% charge and immediately tried to apply a software update.

I’d read that the update can’t be applied unless it has 80% or more battery, so I placed the watch on the dock and waited. Charging engages dock mode on the watch, which is easily going to replace my bedside clock – a smart feature.

After about 30 minutes it had enough charge to update! After a few reboots, it was finally ready to pair to my Nexus 5. I was prompted to download Android Wear and Motorola Connect – Wear being the standard Android app to manage any Android Wear device, and Connect being Motorola’s app designed for the Moto 360.

I wasn’t too impressed at having two different apps to manage the watch, but anyone familiar enough with Android knows this is often the case with accessories – there’s a stock app and an OEM app. It looks like this trend will continue with Asus‘ ZenWatch providing assorted device-specific functions. The Connect app prompted me for height, weight, date of birth etc for my “Wellness Profile”. Either Google knows me so well it’s scary or I’m just very average, because my height and weight were pre-populated. Connect also has a number of included watch faces from Motorola that can be set and customised from the app.

The Wear app allows you to set default apps for each voice control, such as Runkeeper for “Start a Run” and Evernote for “Take a Note”. This page on XDA has a number of apps recommended for the Moto 360, so far I’ve installed Mini Launcher, Facer and Calendar.

As seems to be the case with anyone getting into Android Wear for the first time, the gestures to swipe away cards and navigate around the watch take a bit of getting used to, but I’m sure I’ll get the hang of it.

So far, the Moto 360 has lived up to expectations in terms of looks and function. It’ll be a few days before I can determine whether the well-documented battery issues are accurate or not. 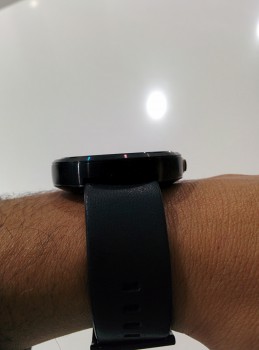 Are you importing a Moto 360? Tell us about your experience in the comments!

Hi Matt,
Ive ordered one, what amperage does the wireless charger need?

I had to cancel my order 🙁 will wait for the official stock now I think.

Waiting on a G Watch R, but would love to hear how your battery life goes (with screen ‘always on’).

The black strip at the bottom doesn’t bother me and i like the design and look. Battery life is my main concern though.

9am to 7pm, 34% battery remaining, above average usage on the first day

Stick up a side profile on your wrist pic chief.

Yea that’s it.
Doesn’t look to bad, i was expecting a big chunk on the wrist with the way others have reported the side profile.
Cheers

Bug report.
The link to the YT vid about the iObject being dropped, goes to the Ausdroid article on the Watch Dogs companion app.

Links should be fixed now, thanks Jeni.

Hate it. I have never have, and still can not stand that black section at the bottom. Personally, I think it destroys the watch – it makes it look cheap.

totally agree with u

And this is why I want a G Watch R.

Holy crap, it does look big on your wrist. Looking forward to the full review.

where did you order it from?