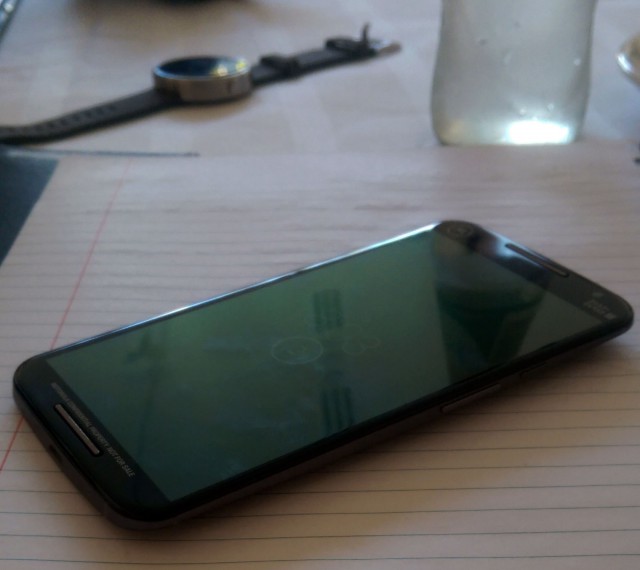 Motorola is hosting media briefings today in Sydney to show off its latest products – the Moto X and Moto 360 Android Wear smartwatch.

The products need no introduction, but the interesting items to come from today’s event is the launch window. Motorola told us earlier this year that they learned their lesson from the US-only launch of the Moto X in 2013, and that seems to be the case.

The company wouldn’t put an exact time frame on the launch — nor, disappointingly, a price — but it’s good to see the company turn its eye to the Australian market in a timely fashion for both products.

The Moto 360 was on-hand in both Black and Silver versions, so we’re hoping to see both versions come to Australia. Motorola says the watch won’t be sold online, but rather it’ll see a retail-only release in Australia.

The company sees the watch as an “assisted sale” items, which means they’d rather have retail staff demonstrate it to prospective buyers and explain the features and functionality. The Moto 360 might also be sold by carriers, much the same as the G Watch. We’ve got our hands on a Moto 360, and are putting it through its paces for a full review soon!

Motorola is expecting to see the new Moto X launch in late October, but this might also slip to early November.

We suspected as much, but sadly Motorola also confirmed this morning that their Moto Maker customisation service won’t be coming to Australia, despite the operation being moved to China. We will however see the Bamboo Wood Grain version of the new Moto X in Australia alongside the more traditional Black Resin.

It seems Motorola’s also no longer a fan of the Australian carrier model, with the new Moto X going direct to retailers and bypassing carrier contracts entirely. Motorola says they don’t see the value in selling this way.

Given the launch price of the Moto X earlier this year, and the assumed price of the new Moto X when it comes to Australia, we can sort of see the point here – if the phone’s priced in the $500-600 range, then it’s a less compelling on-contract device. It’s a little disappointing to see that Motorola’s new flagship phone might not find a wide audience through carrier sales, though. Finally, the new Moto G got a little love – although it’s already available at retail, Motorola showed off the new midrange smartphone, but that’s already hitting retailers (and the Ausdroid review bench).

Motorola did tell us they’ll be selling interchangeable covers at Australian retail, as they did for the original. Hopefully they’ll be available in a wider range of colours.

The phone will also be hitting Harvey Norman on October 1.

Are Motorola’s new products tickling your fancy? Tell us what you’re looking forward to in the comments!

If i get a friend to buy it for me unlocked from the US and have it sent to Australia, would it still work fine?

have you guys heard of the steel strap one coming to australia before christmas or just the leather one?

We need 32GB!!!! I want bamboo-black combo but if that’s not available I still consider getting the black one but 16GB is just too small really

Oh, forgot to mention I spoke with Moto and they said model will be XT1092–not saying they are entirely correct as my contact could be dense.

Any news on the specs of the Australian version of the Moto X? More precisely the UMTS and LTE bands. We might be able to use the Moto Maker from another country with the same bands and get leather or other wood finishes.

I’d like to know this also. XT1092 is the model, I understand. But it’s confusing as LTE bands seem to be different across the same model number.

This is just my opinion, but why would you want leather back on a phone? It is the least durable out of Wood/plastic/metal etc.. It will get scruffy and grainy just after a few months of use..

Yeah, but who cares? I’m happy using a leather wallet which changes with age. My wallet doesn’t fall apart after a year because it’s leather. Leather is durable–it’s not rice paper.

On the Moto Australia site, their page for the new Moto X (hidden) talks about the phone has customisable backs, like Moto Maker is available.

Kinda interesting–means either 1) It’s just a bog standard template from the USA site which hasn’t been updated yet, or 2) It’s not 100% decided that we won’t get Moto Maker.

I think it may be 2, and that Moto are actually seeing how Moto Maker sales go elsewhere in the world. If they go quiet, then they’ll think about introducing further countries.

Is the leather backed version of the motox going to make it here?

Apparently just the Bamboo, or the black resin (read Plastic) version will be coming here. No Leather apparently.

Bamboo back and black front will be available?? 😀

I think the bamboo comes with a white front. Both choices suck really.

Any updates @DanielTyson:disqus on the Moto X’s arrival…or any updates about it? Motorola kinda suck at marketing and updates. Have you seen their G+ Page? Last updated June 2013…I mean, WTF?? They’re wasting opportunities.

They changed marketing companies since then and I suspect haven’t started up the Social media side of things again (Their Twitter account is the same). Still waiting on any updates from Motorola Australia on the exact arrival date, we keep checking

buying a Moto 360 from Dicks Smiths or JB sounds great. I might just be able to swing this if it is in store. this makes buying the Moto 360 much more of a likely purchase.

Very annoying that Moto Maker won’t be available to us. This plus the Motorola enhancements (Moto Active, voice, etc..) are the key differentiation that would make me way from the next Nexus device.

I almost bought the orignal x but none of the shops had a demo model so i decided to go with the nexus 5. Hope they have a demo model this time.

Mitch_J
Reply to  Will Dutton

I wish I had bought the Nexus 5, I bought the iphone 5 – saw the price (off contract) of the iphone 6, so i wont be making that mistake again. So its Moto X or Nexus for me this year.

Welcome back to Android, Mitch. I made that mistake a couple of years back also.

I’m thinking I’ll try the Moto X for a change as it has some wonderfully helpful and practical features (the Moto apps).

Moto X… there is going to come a time when I decide whether to buy a Nexus X or a Moto X.
Whether to spend a bit more for a leather back (is that at all on the cards?).

If it’s too slow coming, the decision will be pretty simple.

I wish the had a definite date for the Moto 360. I’ve got my money waiting!

Me too, I cancelled my expanse (or what ever its called) order due to their back orders.

I would “prefer” buying this from an Australian retailer. Importer warranties can some times leave you short.