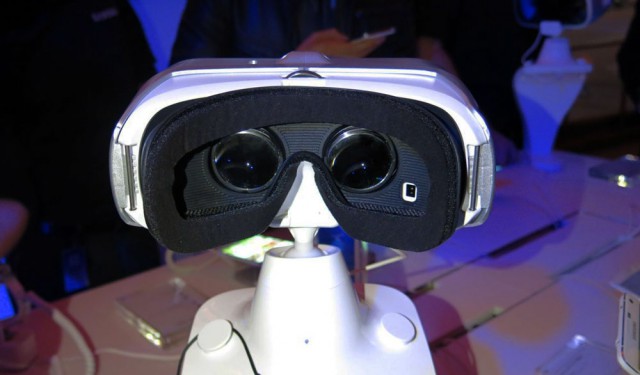 It seems a bit unfair to the hype storm created every time Samsung releases new Note products, but it feels like the Gear VR stole the show on Tuesday night, with the main stage dominated by two demo units running an Australian-shot Great Barrier Reef 3D demo video. The main stage was flanked by a couple of additional units on either side running games, virtual tours and even a Cirque du Soleil experience. There were some impressive queues for the demo stations seeing a number of us waiting around for a go at Samsung’s shiny new headset, so much so that it was as if we’d attended the Gear VR launch event … oh, and there were some new Note phones on demo around the room as well.

That’s not really much of a problem for Samsung, though – the Gear VR is powered by the QHD display on the Note 4, so you can’t get a Gear VR without getting a Note 4. Fair enough.
The Gear VR combines the idea of Google Cardboard with the touch pad found on the side of Google Glass for interacting with and controlling things you see in the virtual world. Most importantly though, it’s powered by Oculus software. This means there’s already a number of apps – or perhaps a better word is “experiences” – that run on the device, and they’re fairly mature. Oculus is due to launch its “Oculus Home” storefront/launcher soon, and the Gear VR comes with a 16GB Micro SD card preloaded with some content.

Despite the obvious focus Samsung wanted placed on the Great Barrier Reef experience, my favourite was the virtual cinema. When you place the Gear VR on your head, you’re suddenly in a massive 3D movie theatre. While the seats are unoccupied, there’s a movie playing on the screen. Like a real cinema, you can look away and it continues to play as explore the virtual space around you. Unlike a real cinema, the screen is actually an interactive media player and I was able to choose what I wanted to see on the screen. I wonder if, in the future, this could evolve into a shared viewing experience with friends in the cinema with you watching the same content.

I also tried a 3D ring-toss game which challenged the player to land rings on rockets to make them launch and earn points. It was fun enough, but lacked a little polish and needed some more nuance in its controls. I think it’ll be interesting to see where Gear VR goes in the apps and games space. , and it feels like the headsets could find itself deployed into service in interesting ways – one journalist suggested that airlines could use them as inflight entertainment, meaning every passenger could get their own cinema screen instead of looking at the pokey little LCD screen in front of them. It’d be nice to see other devices supported, too – like all those Galaxy S5‘s we all got just a few months ago.

The Gear VR will go on sale at $249 in November, and it’s priced pretty close to impulse-buy territory – if you already have a Note 4 by then. I’m also suspecting, or hoping, that at that price it might find itself a pre-order or on-contract bonus for Note 4 on some carriers. Time will tell, but I can’t wait to get another look.

Are you interested in the Gear VR? What do you think about the possibilities? Tell us in the comments!

if they bundle it then I may buy. but i’m not forking out $250 for something that is useless without my phone being in it.

Would you prefer a standalone (or PC-connected) unit instead?

for $250? considering what it’s offering and its limitations?
Yes.