Smartwatch maker Pebble, who have remained quite popular even with the launch of competing smartwatch platforms, has today announced a variety of updates for their watch, as well as announcing some pricing changes.

The big news is of course that Pebble will now track your activity and sleep patterns in the background, with the company announcing new updated apps from Misfit, Jawbone and Swim.com which all take advantage of the new features.

Pebble has also introduced a new Quick Launch, a way to access your favourite Pebble Apps with a long press of either the physical up or down buttons on your watch. You can determine which apps are associated with these actions from the settings menu.

NEW: Activity. Activity tracking apps (e.g. Jawbone, Misfit, Swim.com) for Pebble now work seamlessly in the background. View installed Activity apps and toggle preferences in the Pebble Settings menu. An Activity icon is visible within Pebble menus when a compatible app is installed and running.
NEW: Quick Launch. Set shortcuts from a watchface to your favorite Pebble apps with a long press of the Up or Down buttons. Enable Quick Launch and set app shortcuts in the Pebble Settings menu.
Battery icon is now persistent within Pebble menus.
Select button once again dismisses notifications when paired with an Android device or iOS device on iOS 7 or lower. iOS 8 users get notificaion dismissal for both Pebble and the paired device when pressing Select.
Bug fixes and improvements. 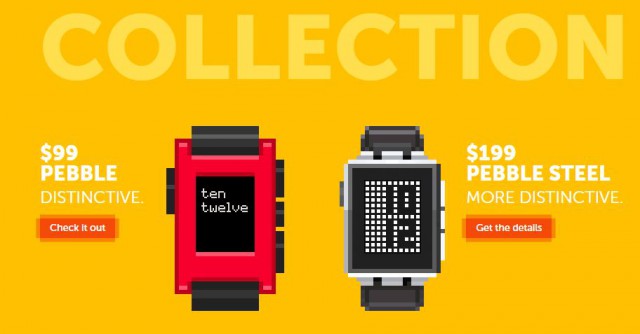 Of course you want better pricing for your Pebble, and Pebble is giving it to you offering the standard Pebble for US$99 (just over AUD$113) or the Pebble Steel for US$199 (just over AUD$227) – a saving of $50 on each unit. This pricing is a great buy with Pebble offering free shipping to Australia through their website. The pricing hasn’t filtered down to local purveyor of Pebble – Dick Smith as yet, who are still asking $179 for the Black and Red versons of the smartwatch, but we hope they will drop the price accordingly.

It’s a nice update from Pebble, in a world where Android Wear is seemingly on the up, a cross platform option still has a place. That is of course until Apple drops their ‘Watch’ and we’ll see then what happens.

Do you still use your Pebble, or have you jumped on the Android Wear bandwagon?

Battery life and the ultra high contrast screen are Pebble’s killer features for me. It works as a watch, because first and foremost that’s what I need it to be.

I’ve had my pebble for probably near 6 months. the things that stop me from looking into owning other watches are: 1: the local price for the Pebble is cheaper then anything else that is decent that I’ve seen (i usually recommend a Pebble to People but most still consider this a little dear for a wearable) and 2: The battery life! this can more then triple the life on a charge as any other smart-watch, that along with the always on e-paper display and the fairly decent app store and you’v got yourself a fairly decent and al rounded… Read more »

I have owned a Pebble watch for over 6 months and I love it. I also have a LG G watch which I got for free with my LG G3 and I love this watch too. I use the Pebble for work as it is paired with my work phone and the notifications are tuned for exactly what I need at work. I have also fitted my Pebble with a replaceable wrap so it is protected from bumps and scratches. The battery life on the Pebble is great as I usually get a week out of it and the always… Read more »