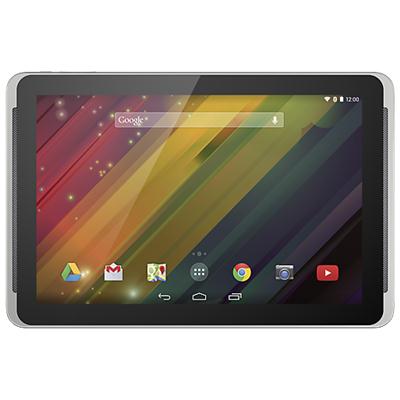 HP has made a bit of a reputation for themselves here, and around the world for releasing products with little, to no fanfare. Earlier this year their latest Chromebook update began selling in JB Hifi with no announcement, and now the HP 10 Plus, a 10″ Android Tablet has cropped up at JB Hifi as well.

The tablet contains fairly decent, though not outstanding specifications with a FullHD resolution 10.1″ display and powered by a 1GHz Quad-Core ARM Cortex A7 processor, with 2GB of RAM and 16GB of onboard storage with a microSD Card slot. The tablet has a 5MP rear camera and a 2MP front-facing camera and a 7700mAh Li-ion polymer battery.

The tablet comes with Android 4.4.2 and given the history of HP Android devices a full load of HP Android apps like media player, file manager and printer applications.

We haven’t heard anything from HP officially yet, but it does appear on their Australian website where you can purchase it for $299. So far JB Hifi is the only retailer listing the tablet but with HP’s reach, that could expand rapidly.

Does the HP 10 Plus sound like your next tablet?

HP are not checking their pages for content.
This is the page footer for this tablet:
Not all features are available in all editions or versions of Windows. Systems may require upgraded and/or separately purchased hardware, drivers and/or software to take full advantage of Windows functionality. See http://www.microsoft.com.

Nothing special but the specs are very suitable for a mid range tablet and a very good alternative to similarly priced tablets like the Samsung Tab 4.

Nothing special but the specs are very suitable for a mid range tablet and a very good alternative to similarly priced tablets like the Samsung Tab 4.

And front-facing speakers? Looks okay, particularly for media consumption as others have commented.

It’s also good to see them focus on one aspect, but still keeping the price low (and without the usual Australia tax!).

In the end, more variety at competitive prices is always good for us, even if this isn’t the tablet for everyone.

Shame about the A7 architecture of the CPU. That’s 2 generations old…

This tablet is of no use to me. It can’t be used as a phone.

It can with the installation of skype of any other VOIP solution. Of course you’d need to be near a wifi access point….

My Aldi Bauhn 10.1in tablet is a 3G phone. I don’t have to use VoIP apps to make/take phonecalls.

So in terms of connectivity, any tablet I look at as a possible upgrade to the Bauhn must have the ability to do WiFi data, 3G data, and 3G phone, at a minimum.

Seems like a good tablet to default the less technically minded to. The CPU might not be the greatest but it’s nice to see a decently priced 10 inch tablet that is ‘grown up’ enough to have a full hd screen. And it may not get updates, but there are worse fates than being stuck on Kit Kat with a near stock experience – like anything Samsung.

That’s what I figured in suggesting this one to dad. All he needs to be able to do in run Skype, VOIP, Email and Chrome – he’s not interested in games or anything that has demanding cpu needs. He will appreciate the screen size and the fact it has a rear camera (he currently has a 2012 Nexus 7).

No need for them to launch with fanfare, as sites like yours give them free advertising 🙂

My dad was looking for a 10″ tablet, have sent him to buy one of these – looks reasonable for the price, particularly compared to something like the Samsung Galaxy Tab 4 which is around $50 more expensive, with a lower resolution screen and camera

Has anyone who bought one of these tried to use apps that use GPS? The original unit my dad bought wouldn’t work with Sygic due to no GPS signal. Got a replacement from HP this week which also won’t work with GPS. Yes, location services is enabled.