Home Mobiles HTC announce the RE an action sports camera 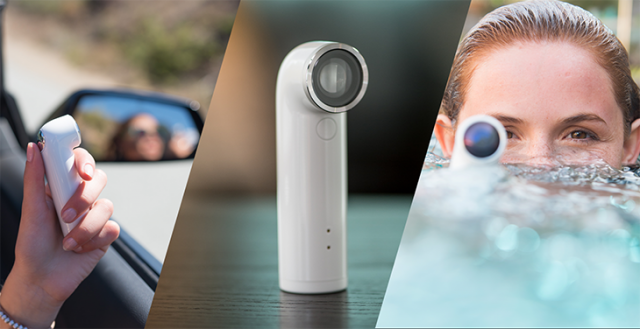 HTC has announced a second piece of hardware at their ‘Double Exposure’ event this morning, launching the RE an action sports camera.

The tiny little handheld camera is designed to fit comfortably in your hand, but can be mounted on a number of accessories that HTC is bringing to market when the camera launches. The camera looks like a small pipe with a curved end, which contains a 16MP sensor allowing you to shoot 1080p 30fps HD videos through the wide-angle 146-degree lens. The RE is waterproof, coming with an IPX7 rating so it lives up to its ‘action camera’ designaton.

The RE has no power button, instead relying on a ‘grip sensor’ in the body which turn the camera on. The video, or still shots are captured with the press of the shutter button and instantly synced with the Zoe app on your phone, or straight up to the web. There will be a RE app for Android which will include editing and sharing functions as well as time-lapse, and the ability to broadcast live through YouTube. HTC hasn’t announced when this app will be available, but should be ready by the launch in November. There will be an API made available for other apps and services to use as well.

The high-resolution video can be saved on the 32GB on-board storage or to a microSD card inserted in the camera. The RE supports up to 128GB of storage so you’ll be able to shoot for at least 100 minutes, which is how long HTC say the rechargeable 820mAh battery will last.

There will be four colours of the RE available: White, Orange, Navy and Teal – with the RE camera site advising that the Navy will be a Best Buy exclusive. HTC has announced the US Price as $199, but not an international price. HTC has promised international sales will be made available, however hasn’t expanded on which models will be coming down under.

There will be accesories. HTC has advised that there will be a number of mounts, cases and more available for the RE including tripods, battery backs, suction mounts and more. We’ll have more information on the accessories and pricing once HTC releases local information.

Separate components are always the best way to go

Imagine wearing one of these on a head mount. One would look rather stupid with what is essentially looks like a plastic PVC pipe sticking up around your forehead.

Geez, such a terrible form factor. Great specs though.

That is one fantastic piece of kit. Finally a compact, fhd recording, long lasting portable camera worth buying.