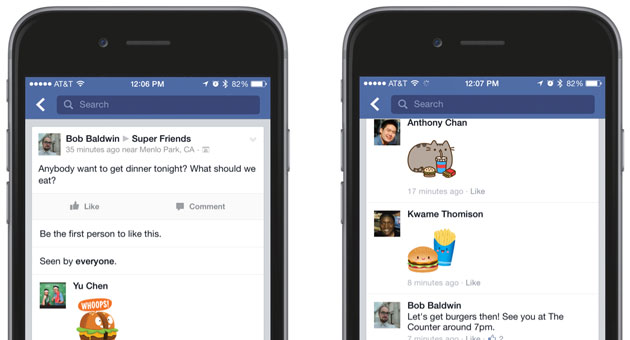 Facebook has begun rolling out an update to their Android app, which will allow you to use stickers in the comments section of your status, picture or video updates.

The stickers, which have been widely available for a little while now in Facebook Messenger, are being rolled out to both the web, as well as mobile apps over the next few days and comes after a long project headed Product Engineer Bob Baldwin and his team at Facebook.

The project, which started as an idea during a hackathon project in New York between Baldwin and fellow programmer Kwame Thomison. The duo built the prototype of stickers in comments for the Facebook website in a single night. The development continued during another hackathon in California where they built the stickers in comments for the mobile web version of Facebook, then expanding that to the iOS and Android apps respectively.

The team working on the project had swelled between 8 and 12 and have been working to push the update out to Facebook users.

The Facebook stickers in comments joins images and other embedable content available for post/status replies, though sadly, this little update still doesn’t provide support for another fan favourite: animated GIF’s, but at least it’s a start.

Whether the update can be switched on serve-side, or if an update to your Android (or iOS app) is required is not quite known, but keep an eye out.

This has been around for a while. I’ve had it for at least 1-2 months. Not using the beta either. Just one day appeared.

Would still much prefer gif’s over stickers though.