The rotating camera in the Oppo N3 is apparently going to be quite impressive according to the company’s CEO, Tony Chen. Mr Chen has taken to Chinese micro-blogging site Weibo to describe the camera module and show off the difference against some of its top current competitors.

Mr Chen started out by outing the camera specs for the phone which is due for launch at the end of this month, announcing the phone will have a 16MP 1/2.3-inch sensor contained in that rotating mount at the top of the handset. He has also shown off a graphic comparing the sensor in the phone to sensors in the Galaxy S5 and Galaxy Note 4, the HTC One (M8), Apple iPhone 6 and finally the Oppo N1. 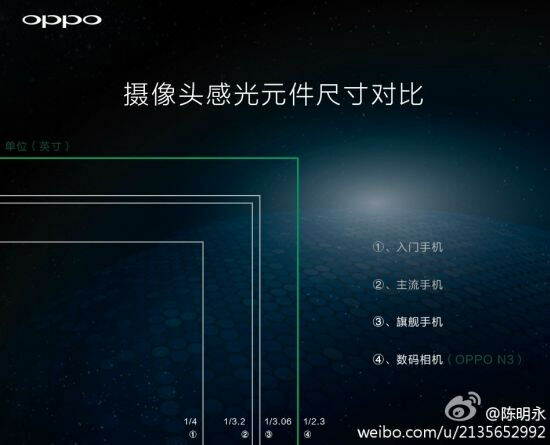 The phone will be big in specs as well as size, according to recent leaks which point to a 5.9″ screen on the phone, powered by a Snapdragon 805 processor and 3GB of RAM. The screen is possibly the only lower end component, with rumours putting the display at a lower end 1080P resolution.

Colour options will be available for the Oppo N3, with leaks showing the phone previously in Pink, White and Cyan. There will also be options for either a stainless steel or aluminum-lithium alloy body.

The Oppo N3 will launch in Singapore on the 29th of October, we hope to see it soon after on the OppoMobile Australia site.

1/2.3? What does this even mean. Surely it’s not a fraction with an embedded decimal? FFS.

Unfortunately, this awful way of describing sensor size has become common across almost all camera manufacturers, not just the phone companies. FFS, indeed.