Home News and Editorial Nexus 9 now up for pre-order on Amazon starting at US$399 +... 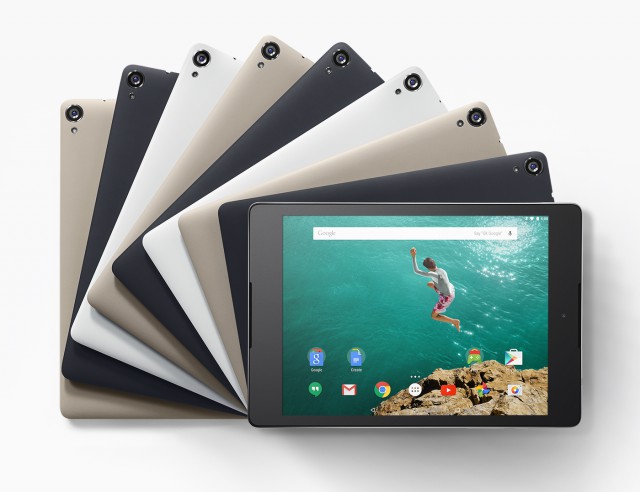 The Nexus 9 is due to go up for pre-order on Google Play in the early hours of tomorrow morning, in the US at least, we’re still unsure about Australian availability. If you’re really wanting to be sure of securing a Nexus 9 tablet as soon as possible then you may want to head over to Amazon where pre-orders for the Nexus 9 are now being accepted and they ship directly to Australia.

Amazon US is offering both the 16GB and 32GB models of the Nexus 9 in Wi-Fi only at this stage. Colour options are Indigo Black, and Lunar White, but there’s no sign of the ‘Sand’ coloured tablet which Google advised would come along later this year. Nor is there any sign of the 32GB LTE version of the tablet on the US site, it is however up on the Amazon Germany page. At this stage, it may be wise to put the brakes on any orders as LTE bands for the tablet have not been confirmed and the specs on the Amazon site do not include them.

Pricing wise, the tablet is listed at the prices we saw listed yesterday (except the LTE which is selling for €569,00:

These prices of course do not include shipping and coming from the US it will be a fair addition. There’s three options being offered for shipping on the Nexus 9:

With Amazon beginning shipping the tablets out on the 3rd of November, if you’re willing to pay extra you may get your tablet by around the 5-10th of November. Of course the best option will be to wait and see if the Nexus 9 appears on the Google Play store here in Australia overnight.

Are you ordering the Nexus 9 in Wi-Fi or waiting for the LTE version?

I noticed that the checkout process shows GST as $0.00 Has anybody bought one yet? I know the listed price is GST inclusive, but do you see the GST component shown on the invoice?

It ships from outside Australia (Singapore I think) so there is no GST. Your invoice will say “Includes GST of $0.00”

This from the Google Play Store “Dual front-facing speakers with HTC BoomSound™” Hope this helps.

please don’t kill me but i’m now thinking i’m going to get an ipad mini 2 (retina).

chris
Reply to  Will Dutton

There is nothing wrong with the iPad mini apart from the OS on them. I hate the dull boring blocks you can do little with but if you are ok with that and you are happy to buy your apps again from Apple (i refuse to give them money for anything any more) then go for it. In the end you need to be happy with your purchase and not worry about what is cool etc.

Do they come with American chargers though?

Can’t wait to get my hands on this device. It looks really promising. However to me, a bit over priced (I mean we got used to cheaper)

When buying from the Google Store, can you get GST back when you go overseas?

Yes. Because they charge you GST

No, there is no GST when ordering from the Australian Google Play Store. It ships from outside Australia (Singapore I think) so there is no GST. Your invoice will say “Includes GST of $0.00”

It includes GTS. Irrespective of where it ships from. That why my Nexus 5 order from Google says (Includes GST of $38.09)

That’s actually not correct. If a product ships from outside of Australia and costs less than $1000AUD, GST is not applicable, or at least, should not be. As you can see in the attached screenshot, my Nexus 9 order includes $0.00 GST.
I hope that clears this up.

Sorry David but GST is not an import tax. GST is goods and services attached to any sale in Australia. This means if no GST is being charged Google is selling on the play store as a Singapore entity to avoid paying tax. Google’s so called “do no evil” is a complete lie and this is an example of it. If you purchased a product for over 1K then customs will send you a bill for %10 or the GST amount applicable plus other fees. If Google sells as Google Australia they have to charge the GST no matter where… Read more »

I agree with you that it is not an import tax and that it is attached to any sale in Australia, but that’s not the case if the seller is outside Australia, which is pretty much what I said in my earlier comment (“if a product ships from outside Australia). The ‘do no evil’ point is a topic for another day. Unless you’re having a different experience to me, ordering the N9 via the Google Play Store in Australia will display a purchase that “includes GST $0.00 AUD”. Is that not the case for you? FYI, it’s being supplied by… Read more »

Just placed an order for a 32GB white. Even if Google does open up Play Store pre-orders for Australia tomorrow I suspect it will cost significantly more than Amazon when you account for GST, “Australia tax” and Google’s usually $20 shipping charge to Australia (at least compared to Amazon’s cheaper shipping options).

But you do get warranty here, I doubt the Amazon ones have an international warranty.

Yeah, I wanted to ask what is the situation with warranty if you buy from Amazon?

It ships from outside Australia (Singapore I think) so there is no GST. Your invoice will say “Includes GST of $0.00”

I originally ordered from Amazon but after realising it’s only likely to be ~$20 difference, I cancelled my order and bought from Google Play with a local plug and easier to resolve any warranty issues than dealing with Amazon and sending it back to the US.