Have you ever had the dream that when you win the lottery you can have that Nexus 6 in your pocket, Google Glass on your face and a Moto 360 on your arm, all working in sync? Taking pictures with your Glass while checking a text from your wife on your arm? Well Google apparently says you can’t use Glass and Wear at the same time…for now.

In a Google + post by one of the Glass Explorers, Keith I Myers he outlines that after the XE22 update the Google Glass conflicts with Android Wear, “It cuts off all connectivity to my LG G Watch.”  The problem is that you cannot have both connected to your notifications at once. But wait – it gets worse.

According to Keith this also disables anything that is dependent on the phone. Which for Android Wear right now, it means basically everything from Music Controls to Google Now. Is this just Keith’s problem? No, there have been others in the comments  that also have the issue. 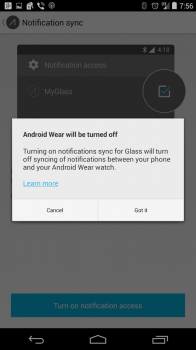 This is quite disappointing, but you have to remember than Glass isn’t officially released as yet, and is bound to have some issues like this. Google will most likely fix this in a later update. So don’t worry too much.

Have you ever had any problem updating your glass? I’m in West Australian as well and just recently acquire a glass but I can’t seems to update the firmware. I contacted google support about this and they said that my update might be blocked because I’m not in US at the moment: it seemed rather weird to me. Did you update your glass via VPN or the like?

I’m sure someone will hack a custom app to sync notifications over manually.

well its explorer edition i really getting sick of people reporting on a product thats basicly beta, if i hear one more time it cost 1500 buck due to this or that FUCK ITS A DEVKIT