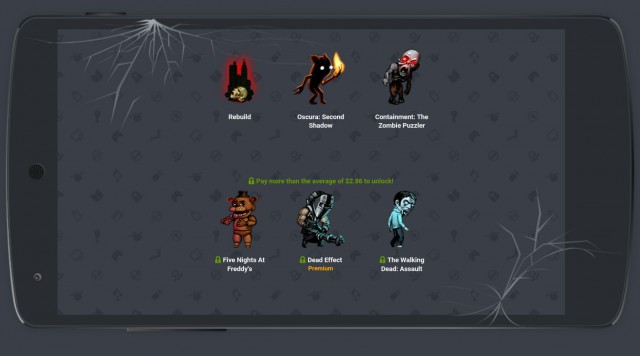 Depending on your background, Halloween has little meaning, especially for Australians, but using it as an excuse to get a good deal on games? Yep, we’ll take that, and that’s exactly what the Humble Bundle folks are doing just that with their aptly named Humble Mo-Boo!-ile Bundle, which went live this morning.

The deal is the same, you can pay whatever you want and get three games: Rebuild, Oscura: Second Shadow and Containment: The Zombie Puzzler. But, if you pay above the average price, which currently stands at US $2.84, you also get Five Nights at Freddy’s, The Walking Dead: Assault and Dead Effect Premium. With this bundle though the usual promise of more games to come isn’t there, so what you see is what you get.

If you’re OK with signing up to mailing lists, then add your email address and receive the Premium game: The Spookening. It also appears there’s a countdown timer on there as well, which means a new game will be offered soon too.

The usual payment methods : Paypal, Credit Card, Amazon, Google Wallet and Bitcoin now are present. You can also split your payment across the Humble Bundle team, the game developers and the two charities the Electronic Frontiers Foundation and a new one this time: the American Red Cross.

You can head across to the Humble Bundle Mobile website now to pick up the bundle, and don’t forget to grab the Humble Mobile Bundle app from Google Play.