We first heard rumours that LG would bring a round Android Wear watch back in August, when the Moto 360‘s release date was still unknown. We already heard from a reader who imported a unit, but still couldn’t wait to get a proper review unit of our own.

The mercifully short waiting game ended last week with the Australian release of the G Watch R in Australia. With few Moto 360 units on retailers’ shelves, it appears LG has actually beaten Motorola to the punch in Australia.

With a G Watch R finally taking pride of place on my own wrist, it’s time to dive in and see how it compares to the other Android Wear devices out there.

At first glance, the G Watch R is both superior to yet obviously derived from the original G Watch. The chunky black rectangle has been replaced by a chunky circle, but it’s got far more pleasant angles on it and LG’s sensibly taken advantage of that chunky nature of current smartwatch designs and fashioned the body into a so-called “diver” style watch.

Against the 360, the watch you prefer comes down to personal taste. That’s no surprise. When I first saw the design it just clicked – something was set off inside me and I knew I wanted this thing on my wrist. Maybe it’s because I’d grown up with some slightly chunkier watches on my wrist, but I think it’s actually the ring around the face that did it for me (incidentally, that ring doesn’t move so the numbers and notches are purely ornamental). Any thoughts I’d had of putting a Moto 360 on my wrist disappeared almost immediately.

Sporting a fully round screen, the G Watch R answers comparisons with the Moto 360 decisively – this watch has no flat tyre, so you get the full effect of the 320×320 round display. It’s also a slightly smaller screen, giving LG’s effort a leg up in the pixel density stakes although it’s sacrificed a size advantage with the chunky bezel around the screen. Still, that bezel provides some protection for the screen that the Moto 360 lacks, and the notches actually help to tell the time when the screen is in its “dim” mode for always-on.

Comparing to the original G Watch, the R’s screen benefits from the increased resolution (320×320 instead of 280×280). Everything’s crisper, especially the text on cards. It looks like Android Wear was designed with this screen size in mind and makes my heart sink when I go back and look at the original G Watch. Colour reproduction is also fantastic – the watch faces and the background images behind cards look far livelier than before. We saw this a similar between the G Watch and Samsung’s Gear Live. 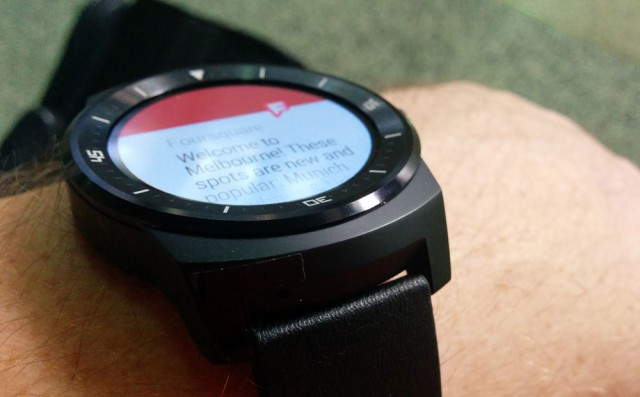 In the initial pictures of the G Watch R, it appeared that LG had contoured the watch to wrists better by lowering the connection points for the bands to sit below the body. Seeing the watch in person now, it turns out this is a trick of the design and not actually true. The band still attaches at the lowest point of the body, leaving you with similar gaps around your wrist to the original. Despite this, the watch still appears to contour to wrists better. I’m certain it’s a trick of the design. 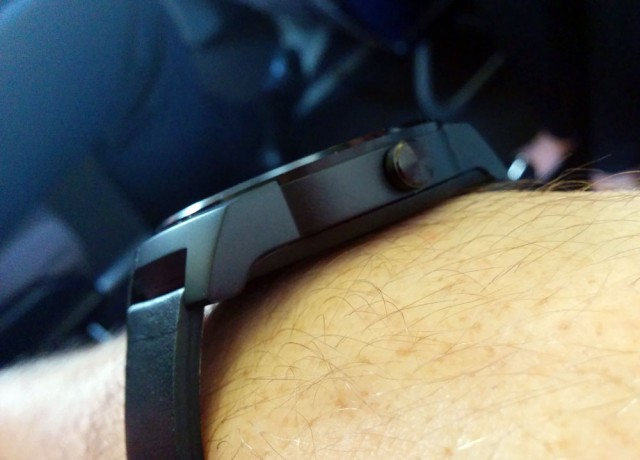 The supplied band is also worth discussing. It’s like LG took the original G Watch band and made it leather – the buckle is the same black plastic, and the holes are the same in size and number (and there’s a decent number of them, too). While we’d heard in the leadup to release that it feels a bit cheap, I like it – the leather is a little thicker and tougher compared to the Moto 360’s leather band (which is softer and thinner), but it actually feels very comfortable. Unlike the original G Watch’s band, the R’s band is not something I immediately felt I needed to change though I am noticing even after a week that the band is starting to hold its circular shape even if I lay it flat on the desk.

The G Watch R features a physical button, answering one of our main concerns about the initial run on Android Wear watches. The button simply dims or lights up the screen (depending on its state at the time), and can turn the watch on with a long-press … although a long-press while it’s on just opens the Settings menu, which has a power-off option. I wonder how long it’s going to be before we see Android Wear devices with tactile analog knobs and the like.

The watch uses the same charging cradle style as the original – a magnetic base that holds the watch in place, but of course this one’s round (and thus incompatible with the original’s charger). It’s slightly superior to the original in that you can’t place the watch on the charging cradle the wrong way around. Spare chargers don’t seem to be available yet, but the original’s didn’t take long to pop up after release. You’ll probably be fine leaving the charger at home anyway. At max brightness with the always-on screen set to on, at the end of my work day the watch still has over 70% charge remaining.

Android Wear is Android Wear. There’s little to distinguish the G Watch R on the software side, save for LG’s faces and the heart rate monitor.

While LG’s made some nice watch faces that ape the familiar stylings of some sports and some dress watches, it does need to be said that they haven’t completely nailed the whole round watch face design thing – I’ve avoided using some of the faces because I don’t like the placement of ancillary information like the battery percentage, for example. Without a proper watch face API, I don’t see this improving any time soon.

The faces also don’t actually seem to be configurable (as far as I can tell, anyway) – the “world clock” face isn’t actually a “world” clock but rather a “GMT clock” for instance, and I can’t tell how to change the second clockface to show time in Perth (for example).

Use of the heart rate monitor also seems a little up-in-the-air. By default, you need to ask the watch to take your heart rate (“OK Google, show me my heart rate”), and wait about 10 seconds for it to do so. It shouldn’t require you to be still for this reading to take place, though. The heart rate sensor app keeps a historical archive of your heart rate but I don’t see that integrating with any other software.

Google Fit seems blissfully unaware of my heart rate – it doesn’t seem to want to associate heart rate measurements with exercise activities, nor time – which does seem at odds with the marketing materials, which promises “daily summaries that relay your step count and heart rate”. There are apps you can use that make the heart rate measurement more constant, although that data is collected per-app and might not be that useful. It’s fair to say Motorola’s running away with the ball on the Android Wear software side, as the Moto 360 has companion apps for configuring watch faces and fitness features (specifically around heart rate). LG doesn’t.

It has to be mentioned that some Android Wear apps aren’t particularly well-designed for the circular watch faces. Developers need to specifically provide square and round layout files in their apps, so it’s a bit disappointing to see things like this: On the one hand, this is understandable – all of the devices out there up to now are square. On the other hand, this is Google’s own software. It happens often enough to be noticeable, but the slightly off text layouts aren’t bad enough to be annoying. I’m sure it’ll get better over time, now that there are two round watches in the market.

One part of the Android Wear experience that seems a little better on the G Watch R is the voice recognition. We know that text-to-speed is handled by the host device, so this might mean the microphone is a bit better in the G Watch R than in the orginal G Watch. That doesn’t mean you won’t still end up with hilarious/infuriating mishearings, though.

The G Watch R is the most expensive Android Wear device currently available, and it makes a good case for why that is. The screen’s a cut above the rest (and doesn’t have the infamous flat tyre of the 360), it’s comfortable to wear and above all it looks like a watch. When you’ve got this watch on your wrist, it turns heads in a way that the first wave of Android Wear watches failed to do.

Software-wise, LG hasn’t worked to provide companion apps to configure aspects of the watch through the phone, though it could also be argued that they shouldn’t need to do so. That’s not really a necessary part of using the watch day-to-day, and I’d be surprised if the standard watchfaces aren’t enough. The Moto 360 just isn’t for me – the flat tyre kills the concept of a round-screened watch before it even leaves the starting blocks (maybe version 2 will be better). I’ve been eyeing the Sony Smartwatch 3 as an upgrade for my G Watch since trying it on at the Xperia Z3 launch event, but I think LG’s just killed my interest in it. They might have to fight me to get this unit back.

Are you picking up a G Watch R, or waiting for something more? Tell us in the comments!

The World Clock watch face can be changed. The first time you put it on, it runs you through a wizard.

Can’t possibly decide between this and the 360 without seeing them and trying them on!

So I bought one of these on thursday night off the play store, then, somehow, was one of the lucky guys who got a call off jb hi fi to say my moto 360 was in! I can’t decide which one I’ll keep and which one to sell!