Earlier this year at Google IO, Google not only announced, but showed a preview of Android Auto. Since then we’ve seen very little on what it is and how it will work. Today Google have introduced the first APIs for building “Auto-enabled” apps for audio and messaging.

It seems, from the demo posted in the video below, that the user’s Android phone is plugged into the head-unit which will launch the Android Auto interface onto the head-unit. The phone runs the OS but the screen is projected, or “cast”, onto the display of the head-unit, while the user interacts with the touch display on the head-unit, as are any steering wheel controls allowing the user to get the required information while still focusing on the road.

At this stage there are only APIs for audio and messaging apps only. The audio allow for the user to browse and play music/podcasts while the messaging API allows for messages to be read aloud, as well as allow users to reply using voice controls.

The Android Auto interface has a distinctive Google Now like appearance with shortcuts along the bottom for navigation, communication, audio and “car-related stuff”. There is also a microphone button for initiating voice commands or searches.

For developers the API allows for easy developing without the need to design the UI yourself. The developer just need to provide a few basic things such as strings and colour palette and Android Auto does the rest, no matter the resolution of the screen or hardware inside the head unit. The data for Android Auto can also be included in an already existing app without the need for developing a whole new app. Android Auto works by projecting apps and services running on the users phone onto the car’s screen and thus all that needs to be done by the developer is to extend their current app to work on the car’s head unit.

At the moment apps for Android Auto cannot be published yet and there is no mention of when this will change. In the future more app categories other than audio and messaging will also be supported. 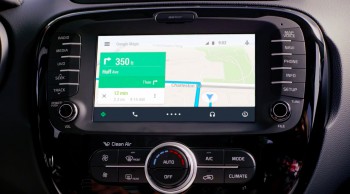 At this stage there is no mention of how a user will be able to get hold of an Android Auto compatible head unit nor when it will be available. For many of us the car’s operation is built into the head unit (eg. MyLink on Holden cars) in which case replacement is not an option. I am thinking a small add on to plug into the auxillary input of the car à la Chromecast for TVs would be perfect and hope that someone makes such a thing available.

Google for Android Auto ? When other APIs will be available?

Looking at it, it appears that someone looking to develop an app for the car is better off developing an app for the phone and ignoring this, at least at the moment. Not only does it *require* Lollipop as a minimum on the phone, there is a laundry list of things that Google wants to ban you from doing, in the name of not distracting the driver. That would seem to include even satnav type actions, let alone more flashy apps – and without connection to ELM327/Canbus it really doesn’t seem to make much sense at present. Given the way… Read more »

Thanks for sharing that with us.

I.am.not sure how many applications will actually have use in Android auto .

As for the plugging in I was amazed when they did that. Could it be a limitation of Bluetooth transfer atm?

Bluetooth core functionality from day 1 is audio streaming and human interfaces – how could it not be able to do everything that Android Auto can manage? Is it the casting of display data? It shouldn’t be, but it is a weird system structure. Moreover, it seems that adding full Android functionality to a head unit (with a display) is about $70 – so why not just do that and forget the phone for most purposes? And whilst yes, plug-in is bad – requiring 5.0 is worse. It cuts the potential market down two ways – to those with a… Read more »