Parrot, the company behind one of the most popular consumer level drones in the world, has announced that their latest offering, the Parrot Bebop, will be launching in Australia next month.

The Bebop drone is a third-generation quadricopter, offering a stable platform which allows you to stream and record 1080P video from the drones 14MP front-facing camera which is seated behind a 180° ‘fisheye-lens’, back to your phone or tablet. The Bebop Drone is light-weight, made from a Glass fiber reinforced(15%) ABS structure, with poly-carbonate propellers, with both an inside, and outside hull.

The Bebop Drone comes with two batteries, which offer up to 22minutes of flight time. There’s built-in GPS, and a bundle of sensors to help give the Bebop drone a truly stable flight pattern including a 3-axes magnetometer, 3-axes gyroscope and 3-axes accelerometer. You can also grab the Bebop drone in one of three colours: Blue, Yellow or Red.

The Bebop drone is an improvement on the previous Parrot AR.Drone 2.0, offering a more powerful processor. The Bebop drone also contains robust safety features, including the ability to automatically switch the propellers off in the event of a collision. The drone will also land immediately in the case of an emergency, or you can direct the drone to return home, which it can do thanks to on-board GPS. 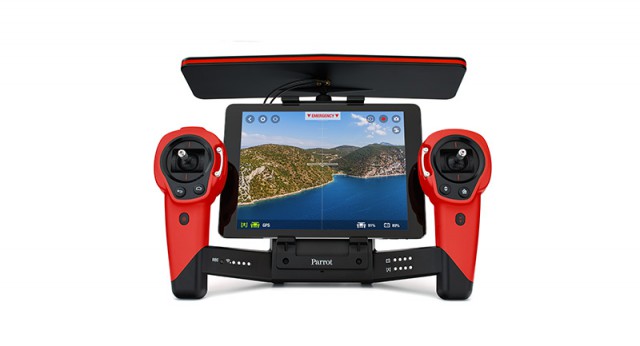 An added option for the Skycontroller, is the addition of a first person mode. First Person Mode is available after connecting personal video headsets, such as the Zeiss Cinemizer, Epson Moverio or Sony Personal Video Player through a HDMI connection, offering a unique experience while flying.

The Bebop Drone runs on the Parrot Free Flight 3 software available in Google Play. Free Flight offers all your pilot functions, including flight plan, Pilot Academy and you can set altitude, speed and even do a one-touch flip. The Free Flight app will also let you capture and instantly share still shots to Facebook or Picassa or video to YouTube immediately. Free Flight is free in the Play Store. I bought the previous Parrot drone, the AR2, and I was very disappointed with the video quality. It may have been 720P, but the scan line image processing was so slow that you just got a wavering mess.

Phantom 2 is the way to go.