The Nexus 6 is finally starting to arrive in the hands of a few very lucky people (no Aussies at this stage unfortunately) and many are finding that certain bench speeds are far below par. We have seen reviewers bench the read/write speeds lower than the Nexus 5.

Arstechnica, in their review of the Nexus 6, noticed the significantly poor sequential read/write speeds blaming it on a bug in the bench score:

Sequential read speeds are mostly going to affect load times, which backs up what we see in the video—opening things just takes longer. While you might have a faster frame rate in a game thanks to the SoC, the storage is going to be a bottleneck….we’ve discovered that AndroBench has a bug which scores devices too high in the new OS. The actual speeds of the Nexus 6 may be different than what our chart shows. We talked to AndroBench’s developer and are awaiting a bug fix. The poor load times on games and apps don’t lie though. 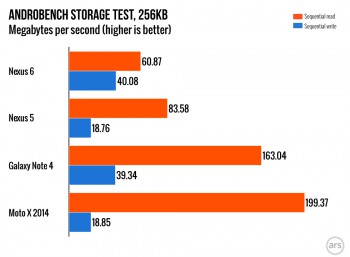 Since then the overall slowness of these read/write speeds has been attributed to the new software encryption of the phone that Lollipop uses and has since been proven on a Nexus 5.

If you have a few spare minutes the following is a quick explanation of encryption and how it affects the Nexus 6:

Encryption means all the data on your phone is stored in a “secret” coded form. It can only be accessed after you unlock the phone with your personal pin, password, pattern lock, whatever. Anyone who gets a hold of your phone while it’s locked or even off won’t be able to get any information off it.

This means each time any data is read or written, it must be encoded or decoded; includes app launches, app installs, pretty much everything. That process can be CPU intensive unless it is optimized or you use a special processor just for it (like Apple does with iPhones).

Currently, it appears Android Ls encryption routines are done in software on the CPU and are quite heavy on it, having the indirect effect of slowing down all reads/writes.

The average user will most probably not notice it unless you’re regularly loading large games or running benchmarks. Google’s official stance is you cannot disable it on the new Nexus 6/9 and they are unlikely to change that. You can expect this on other devices released running Lollipop going forward too. However Google will certainly try to optimize the encryption via updates and eventually Android devices will come with coprocessors like the iPhone that offload encryption completely from the CPU for zero performance hit.

Of course, with the Nexus 6, disabling encryption should be really simple with some hacks from XDA–the method (tested on Nexus 9) is not noob-friendly, but you should expect “one-click” tools to do that show up within a few days of people receiving the phones.

It appears that not only was this person accurate with their explanation of how encryption works but also about XDA coming up with a way around it. Using the Nexus 6 source code an XDA developer, Bbedward, has compiled a boot image that will disable encryption on the device. Of note that it doesn’t entirely disable it, more that it give you the option to turn it on or off. It is very early days but the results are already stunning with the recorded read/write speeds being higher than those achieved with the Note 4 by Arstechnica.

Once again this is a great reason to buy a Nexus device. The development around a Nexus is always cutting edge and allows the user to make the device operate how they want to operate it.

If you are lucky enough to have a Nexus 6 in your hands and want to speed things up a bit head on over to XDA and download the boot image and flash it in fastboot mode. This mod is not one for the faint of heart, nor the newly interested Android tinkerer. The mod has been barely tested as the developer doesn’t have a Nexus 6 of his own. I have no doubt that those other devices that are encrypted and running Lollipop will eventually see hacks to turn the encryption off as well.

If you do head down this path it is important to keep in mind that the encryption is there for the safety of your data and turning it off may compromise your data.

Still wondering when can we order or pre-order in Australia?????????

It seems the pre-order is already open in UK and India?

not the only one mate- several of us have pre-ordered from companies other than Google.

Katherine . if you think Robert `s bl0g is astonishing, last saturday I got a top of the range Infiniti after having earned $8476 this past month and would you believe, 10k this past-month . it’s definitly the coolest job Ive ever done . I actually started six months/ago and almost straight away startad bringin home over $72, p/h . read this….>