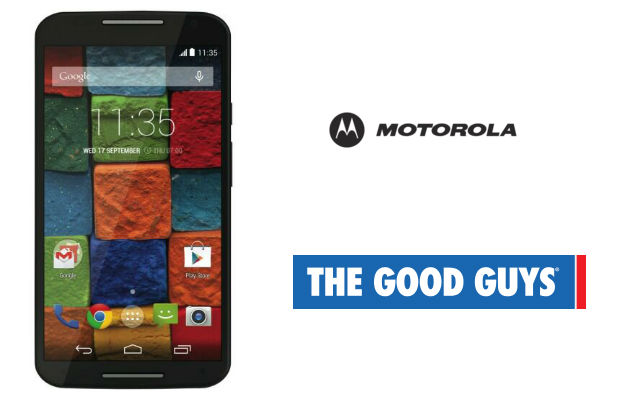 The long awaited launch of the Moto X (2014) may be imminent with The Good Guys now listing the phone on their website, with an estimated shipping time of 5-10 Days.

The Moto X Gen 2 – model #: XT1092 – is listed for pre-order at $697 which sits just under the $699 price we’ve heard will be the RRP when it officially launches. Further, it appears that at this stage, The Good Guys are only accepting pre-orders online, so no going to stores for this one. In late September, Motorola officially announced that the phone would be the 16GB model, and would be available in Black Resin and Bamboo Wood versions, but so far only the Black Resin model appears to be available to pre-order from The Good Guys.

Full Specs for the XT1092 model being released in Australia include :

While Motorola has not yet officially announced the phones availability, the 5-10 shipping date confirms the late November launch window as suggested by Harvey Norman on their website earlier this month. We hope to find out more about the actual launch date of the Moto X Gen 2 quite soon, so stay tuned.

Update:
And it’s gone. Looks like The Good Guys slipped up on this one. Hopefully we hear something soon, but at this stage, Motorola Australia has not released anything else on the Moto X Gen 2. We’ll keep you posted on further updates.

Annndddd it’s gone… (completely. The page. Not ‘sold out’)

It’s still available on Harvey Norman’s website but I don’t shop there any more due to a few bad experiences. I’m still hanging out for the bamboo version anyway.

Please heads up people. DO NOT buy a phone or tablet from Good Guys, consumer affairs have a separate department to handle Good Guy complaints they get so many. FACT!!

You need to back that up, as a reseller they sell product and those products have manufacturer provided warranty so you need to show your proof or stop making comments like this

As someone who owns the Z3 Compact, in what way have they wasted your time? You just said you already bought the Z3, so looks like you managed to use your own “wasted” time.

Does it really support band 1 ?

You would’ve said “No Sale” anyway.

True enough, as the 2014 MotoX has no microSD capability.
It’s why I’m hoping Lenovorola do a 2014 MotoG with 4G for the AU market, and that they keep the microSDHC capability of that device intact, or better yet make it microSDXC capable.

That’d still be too expensive for you. All the phones you mentioned the other day were sub $100 phones.

Works out to around $216 average spend. Hence super cheap phones. I honestly don’t understand you. Most of the phones reviewed and talked about on this site are at least $250 minimum spend. And the flagships are at least $700-1000. You obviously aren’t going to spend a lot of money on a phone. So I don’t understand why you say no sale when we knew you weren’t going to buy it anyway. With all the cheap phones you’ve bought in the past you could’ve bought a couple of high end flagship phones. Not to mention almost none of those phones… Read more »

Thank you, Jeni comments for the sake of it nothing is good enough but she can’t afford it anyway, a nexus device was too expensive for Jeni even though it gave so much for so little so she makes excuses why none is good enough. Most are good points but I for one have long had enough of the negative comments, correcting spelling etc.

I’m all for someone having an opinion, but hers are always the exact same. Either it has no SD card slot or it’s too expensive or the lack of 4G. Earth to Jeni, you can’t get an $800 phone at a $200 price point. Even if you did there’d be a lot of compromise.

Bought a Moto G as a “make do” phone while I wait to decide on a better phone to get. Liked the Moto G so much that I decided I’d get another Motorola.

Nexus 6 is too big.
Moto X only has 16gb available here.
Motorola Turbo, or whatever it’s called, probably won’t make it to our shores.

Just as an fyi, this phone is up on good guys ebay store now whic is 20% off next weekend so hold off if you plan on buying and save yourself a good $100+

Just checked, and I can’t see any mention of that.

Its part of the ebay Sunday deals, next weekend, target, dicksmith, good guys and masters will all have 20% off their ebay stores.. the code is always announced either late saturday night or first thing sunday morning

I think I’ll stick with my Xperia Z2. It has more storage, more RAM and a much bigger battery. It’s also cheaper second hand.

Yeah I’m still loving my Z2. I want that pure android experience again though. Getting on to a custom rom on the Z2 is a complete nightmare.

I hate being the guy who winges in comments…

Why are motorola only selling the 16GB version in Australia?! It’s almost as if they intentionally want this phone to fail over here.

I came here to complain about the same thing.

I’d seriously considering this phone if had 32gb or more on board. 16gb instantly wipes it off the list.

I know its not the same but I bought the bamboo full spec’d version from the states (ebay) and it still cost $100 less that Aussie’s RRP. Works great on 4G here too…

Thanks for the tip….the problem I see with having to import yourself or but from overseas is the lack of support if something goes wrong. I just don’t understand how Motorola can’t get this right??? I have limited background in marketing and sales but still feel like I have more insight into how to best implement their products…It’s bizarre

judging from previous stuff I’ve read on here, it seems to be that aussie carriers like to only carry 16gb versions, so you can’t complain about there not being a 32gb of the model you want. but in this case… given Motorola appear to be selling it directly to retailers and not through carriers… I wouldn’t have thought the carriers wishes would apply.

I thought I’d just wait since end-Nov wasn’t that far away.

But now I’m wondering when the XT1092 here will get Lollipop, and if they’ll expand the LTE Bands some more, to 28 etc.

Maybe the XT1095 is the way to go for updates–and better fringe-support from XDA.

The lollipop soak test has already gone out to the Verizon models, so it should be released very shortly. In terms of support you will certainly get more with the pure edition so it really depends on what your you needs are…

No problems with 3g or lte? what carrier are you with?

I think I might just go with the US version via black friday!

The version that’s $140 off at the moment is the pure edition and will work on LTE and 3g and yes mine works perfectly fine,

Motorola are bad at selling things.