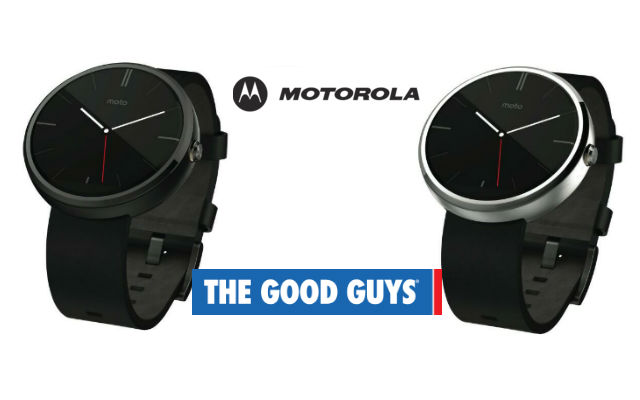 Both the Black and Silver versions of the Moto 360 showing up, priced a little below the $329 RRP announced last month, with The Good Guys asking $319. The watch is listed as available for Delivery or In-store pickup, with the watch due to ship in 5 – 10 business days. These are the base models, with a metal band version due to arrive in Australia early next year, with a slightly higher retail price of $359.

Chris quite enjoyed the Moto 360 when he reviewed it, although his eye has now been drawn to the Sony Smartwatch 3. You should probably make up your own mind and from what we can see, several of The Good Guys stores are showing stock, so head on in to a store near you to check one out.

And it has now been removed from the good guys website completely. At one stage they had sold over 67 of them in the first hour then after the 360 was removed from sale it dropped to 44 sold all up. I did get an email to say the order had been sent to a store for processing but somehow I don’t think they can fulfil orders. I know one person had 3 orders of 3 units that I could see.
I don’t have high hopes of actually getting this thing but anyway.

Ordered at around 10:15 this morning, got a call later saying they were all sold out and no idea when back in stock…
Starting to wear thin, JB had my money for a month without updates or delivery, so cancelled and went with GoodGuys, and sounds like it will be the same story…

Qld time or NSW time ? there was a sudden spike at 11 which I assumed was QLD not realising that it was based on NSW time.

Bought from good guys ebay 20% off saving $63, the only reason I bought one.

i got one from Harvey Norman City West (WA) pricematched to Good Guys price $319. Just go to Harvey norman website, look up moto 360 and on the moto 360 page check for stock, there are plenty in WA.

I actually picked one up on Friday from Harvey Norman Springvale for $325. I got the only silver one, it seems. None of the other stores had them and I just by chance happened to call Fountain Gate asking when it would be in stock and they told me that Springy had them. I love everything about it except the battery life

Don’t bother checking for stock if you’re from Sydney. Melbournesiders look like they may have more luck.

Edit: It appears the silver model is available in Melbourne but not Sydney and the black model is available in Sydney but not Melbourne. However, the Good Guys stock finder is not accurate. When searching at postcode 2000, Sydney CBD, it finds stock, when searching with postcode 2763, about 40km out of Sydney the Good Guys claim there is no stock within a 200km radius. One of these two results is inaccurate!