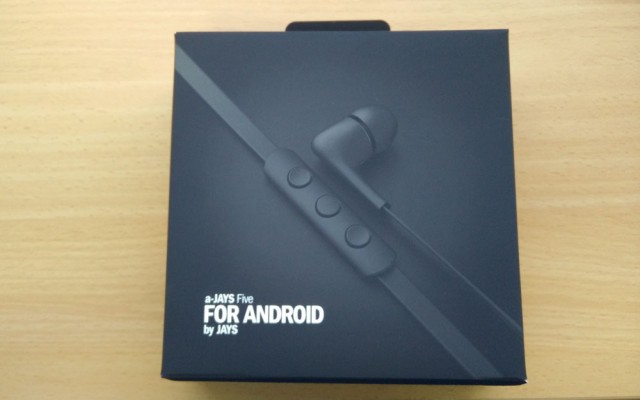 Jays are a fairly little known audio brand in Australia, often only discovered by people accidentally when Googling for audio gear. They’re a Swedish brand with their office based in Stockholm and while they don’t have a Bose or Sennheiser-grade reputation behind them, their equipment certainly meets the quality expectations of someone who’s spending fairly significant sums of money to buy.

I’m not a complete audiophile, but I appreciate good sound from good hardware. I’m not easily dazzled by earphones or headphones and having had some fairly expensive earphones in the past that disappointed me, so I was honestly skeptical of the quality Jays could offer; but in the end they delivered and delivered well.

I’ve seen a number of attempts from big name players to “dress up” earbuds with colourful cables, flashing lights and other various cosmetic additions. Most of these fail, some on a scale quite grand.

Let’s be honest, earphones are 2 tiny little speakers you jam in your ear with a cable hanging off them to connect to your phone (or other music device) so there’s not a lot you can really do to make them look good.

The general look of the a-Jays Five is really simple: Black (in the case of the review unit – white is also available). Simple single-coloured earbuds, a flat cable in a matching colour, and a black 3.5mm connector into your devices. The cable from the earphones to your device is a generous length at 1.8 metres. I know this sounds quite petty, but in the past I’ve used earphones that were either designed for “height challenged” people, and the cable wouldn’t reach the bottom of my pocket, constantly unplugging them or tugging on my ears so this was a great relief to me.

Of course, the flip side of this is that when you have a 1.8 meter cable on earphones leaving you constantly bundling cable, tripping over it or dealing with tangles – it can be a nightmare! I found that the flat cable design actually helped with this, because it’s nearly impossible to tangle – unless you’re doing it deliberately.

Jays also includes a round hard case to protect your earphones when they’re not in use (and probably buried somewhere in your bag). The real beauty of these earphones for me is the fact they’re specifically designed for Android. That means that (unlike the “designed for iPod/iPhone” earphones) the controller on the cable actually works on any Android device, my testing included a 2013 Nexus 7, Nexus 9, Nexus 5 and a OnePlus One.

There are three buttons on the controller: Volume up, Volume down and playback control (single press operating as Play/Pause, a double tap advancing a track and triple tap going back a track).

Here’s the cool bit – you can configure what each of the buttons does with the app. The actual earbuds have a slight angle to them, so it’s quite important that you get them in the correct ear but they’re labeled, so it shouldn’t be too hard.

Jays includes multiple caps to cater for various ear sizes, they’re quick and easy to change over and when you find the right one you’ll know it – the earphones will become comfy and they’re stable in your ear, even while moving around quite actively. You’re never going to get a full range of sound out of earphones compared to headphones – simple physics will tell you that. A speaker the size of your fingernail can’t produce the same audio response range that a set of headphones can with a bigger speaker (and those bigger cans usually more power draw from the source device too).

Once you find the right caps to suit your ears, plug in and turn the volume up.

I mentioned earlier that I was skeptical about the potential quality of these earphones, but they really are quite surprising. I didn’t expect any bass or even particularly good mid range sound – at best I was just hoping not to get a shrill, ear piercing sound or tinny sound reproduction.

I was actually blown away by the sound that these earphones produced. The high range sound was crisp, the mid range had some grunt to it and the bass was, well… actually present. These tiny little earphones managed to pack enough punch to have some bass in the sound, and that’s a win for them.

The overall design of these earphones is fairly subtle and understated but they still have a slick presentation that doesn’t look out of place in a high end gadget array, and frankly you’re unlikely to find a better music experience on an alternative set of earphones.

Personally, I listen to hundreds of hours of music, podcasts and videos every month so my personal preference is on-ear headphones. Were I not a “desk jockey” though, I’d probably head down the earphones path for the portability aspect and I’d say that a-Jays Five for Android are the best earphones I’ve used for under $120.

You can order the a-Jays Five in white or black directly from Jays website where you’ll pay in US$ and get free 3-6 day shipping from FedEx. Right not there’s a sale on offering 30% off, which might sweeten the deal if you’re interested. We’re also told that the headphones will be at selected Harvey Norman stores very soon.

Do you use in-ear on on-ear headphones? Will you be checking out the a-Jays Five? Tell us in the comments!

I got these and found that they fell out all the time. I found a very similar brand called NOCS. These sit in my ears fine, and are remarkably very similar to the A-Jays

“controller on the cable actually works on any Android device”

Ah no, checking the site reveals that it does not work with the N4 as well as a few other older devices.

For those reading, while it wasn’t mentioned these do have a microphone. Perhaps the author could provide some insight into its quality sometime.

I’m always looking for good earphones and this one looks like it’s worth a purchase. A suggestion if I may, when you put the links in the article, can you highlight the words in a different colour or font? The blue looks too similar to rest of the text in the article which kind of make it a bit hard to see.

i’ve got a pair that i’ve used for a week that you’re welcome to buy off me. not for me at all.

Cheers for the offer but I’ll pass as I’ve got a pair another pair of earphones coming my way (not a-Jays) so I think I’ve spend enough on them already.