After the Nexus Player went on-sale earlier this month, and we managed to get a hold of one. Though I’ve only had very limited time with the device so far, I wanted to share the unboxing, setup and some impressions of the device. I was rather excited when I got the box at work, unfortunately I was also rather busy so I had to wait until the evening before I could even open the boxes, let alone think about playing with the new toy. I’d been told by a number of people who I’m in contact with and have had some hands on time with a Nexus Player already that it is a very small physical device and they’re right, it pretty much fits on the palm of my hand.

The setup really is a very simple case of: You’ll have to install an OS update before you can log into the system, but that’s hardly an ordeal; merely a delay to playing with your new toy. The login process is quite simple, you can use either use your phone to login (NB. you must have the Nexus Player and your phone on the same WiFi Network) or normal login & password combination. Because I wanted to try it out, I used the phone authentication method which was extremely easy and worked very quickly, probably quicker than going through a 2 factor auth login. 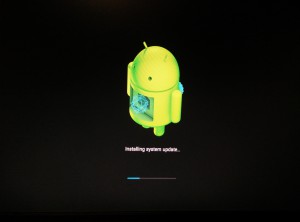 Once logged in to the device you’ll see a fairly cut down, 1 touch navigation menu system. Preinstalled you’ve got the normal array of Google Apps such as Play Music, YouTube, Google Movies and TV and of course; The Play Store, albeit very cut down and only allowing you to install apps and games that have been tested and approved for use on the Nexus Player. So you’ve got a pretty small choice of apps right now, but it’s enough to be enticing since they’re entertainment focussed apps like:

That’s just a few of the many there, along with a host of remote games and controller based games that you can use on your Nexus Player:

The use of the system is very intuitive, one touch navigation and use your remote to select what you’re after and it starts near instantly. On first impressions, Android TV really is a simple system that you could give to your Grandma for Christmas or birthday knowing that your tech support calls are going to be very minimal.

If you’re expecting the world from Android TV, you’ll be disappointed but if you approach the setup with the expectation of a Chromecast on steroids, adding some storage and extra interface ability you’re going to have some realistic expectations and hopefully get the most out of you Nexus Player. Over the coming weeks, we’ll aim to get some more information about the Nexus Player and some handy tips and tricks on how to get the most out of it on the site so that if we ever have a way of officially getting one in Australia you’ve got all the information you need already available on Ausdroid.

If we do get the Nexus Player in Australia, will you be replacing a Chromecast with one or adding to your collection of Google toys?

If I bought a Nexus Player from the US and had it sent to Australia would it still function as normal i.e. PlayStore, downloading apps, accounts logins? I’d have to be an US to Australia adapter kit also I know. Cheers.

Sure does – Phil, Scott and Dan have all done this. As well, one of their readers won a Nexus Player in their raffle.

Thank you, Gricho. I just want to confirm that I don’t need to play with any DNS or router settings and can just connect to my home Wi-Fi network and continue using it?

Look forward to it replacing my Chromecast.

The other day when I looked on Google’s us play store it was listed as $109 USD and as of seconds ago its still listed at that price. I know a lot of people are reporting $100 but I have no idea where they are getting that figure from. No fact checking in the online press world would be my guess!

People are reporting $99 as it is the RRP.

No you’re incorrect use a vpn and visit the Google Play Store and you will see you’re wrong.

Why would using a VPN versus a proxy make a difference?

No idea but something in you’re setup is different and is giving a different retail price. Screenshots from media outlets when the Nexus Player was released also suggest $99 price tag. Beyond that, there is not much else I can suggest other than try with no cookies and use a different service and check if the result is the same.

Hi Josh, it looks like the Proxy or VPN you’re on is connecting to Canada as it’s $109 in Canada.

Thanks, I wondered why Google wanted to charge me more. Thought it must have been a special provocateur tax they were charging me.

This is what I see on my Mac using a VPN Service – I reckon you might have used javascript to modify the page contents? Or for some reason pricing is varied.

Unless the proxy did something, I certainly don’t have the skills to modify the page contents using javascript.

I have a Nexus Player which I have been using for Netflix / Hulu Plus / Casual Gaming and XBMC (KODI), so far the experience has been much better than my Roku has been and although the platform is early; I reckon it has a good future ahead of it, if Google picks up app catalogue gaining Apps such as GTA, Dead Trigger etc. Also I could explain how to get Netflix running on it without a US Google Account if someone wants to know as well as how to get the Default TV app reinstalled and configured with KODi… Read more »

Or you could just point them to our post which explains it Harrison: http://ausdroid.net/howto/chromecast-coming-heres-can-get-netflix-work/

The DNS on The Nexus Player is changeable and thus doesn’t need a router with DD-WRT and the Netflix app cannot be installed through the Play Store under normal circumstances. You need a US Play Store account with at least one purchase. I was going to explain how to bypass this requirement and change the DNS on the Nexus Player

Harrison – we had something coming up as a post – it will be up as soon as we can.

OK that’s good – In the mean time is there any wait to get my posts to show up so people can see how to do it. I posted links to direct guides on how to setup Netflix – this will be very useful.

In my experience, no.

It seems like a written piece on the matter is coming soon so all people will see it, who visit the site rather than scrolling through comments which seems like a better a idea (as long as it is followed through with).

So why post the question after you knew that information. Are you stupid or being difficult?

I got an email from Ausdroid Staff detailing to me their intentions. So I updated where I felt necessary. I don’t think provocative comments are suitable in this discussion.

You posted a question after Daniel Tyson publicly in the comments stated an ausdroid article on the same topic was coming. I responded to your question very plainly with no provocation. Just plain facts. You then tell me the better idea is to wait for the Ausdroid piece. I respond that this information was already available before you posted your question so why bother posting your question. The only two conclusions I could come up with were you were being deliberately provocative, which you accuse me of or you were suffering from a moment of stupidity. Good day to you… Read more »

“Are you stupid or being difficult?” is not provocation? LOL, are you for real?

My first response to your question was very plain with no provocation. I made no comment about whether the later comment/question was provocative. I can see how it could be taken as so. However, as I was at pains to point out it was not my intention. The only two conclusions I could come to were what I stated and I was asking you if either was the case. If you cannot see the stupidity or provocation in posting a question and then telling a respondent to said question that your question was basically irrelevant because of information that was… Read more »

“there is no point continuing this conversation” – I Agree 🙂

Hmm, this could be interesting. Does HDMI-CEC work? This could replace my Chromecast and my Raspberry Pi.

HDMI CEC works and Yes it runs Plex and XBMC/KODI amazingly well! Chromecast support is much much faster playing videos than the normal chromecast is too for example Youtube opens in 2 seconds rather than 10 seconds

Can you email me details on how to get Kodi going please? I’ll investigate this when I have internet at home again…

Thanks – couldn’t be simpler, just adb install the apk from the Kodi site.

Yer it is just running Android at the end of the day so you can install apps (via side-load) to you’re heart’s content.

How complete is the Plex client? Playlists / Plex Home?

Yer it has Plex Home and Playlists from what I can tell. A lot of the advance settings are missing however like storage location, cache size etc. Also only Plex Pass version is available at moment. Despite this you can sideload the normal Plex Client if it’s not to your liking and use that; but then you lack material design.