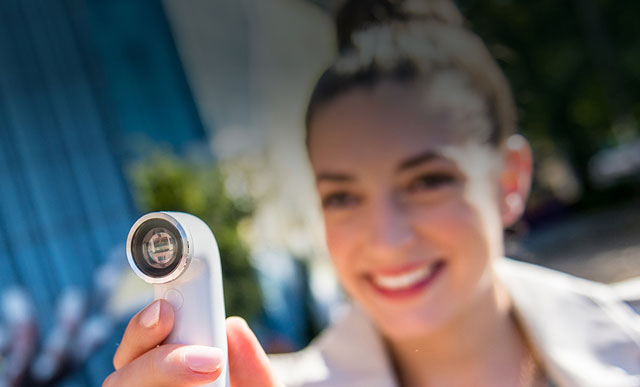 First announced in New York in October, HTC has today announced that its pipe-shaped Re Camera will launch today at Telstra, Fone Zone and Next Byte stores nationwide for an RRP of $250. There’s also an Australian site for the product online now at recamera.com/au.

The RE Camera is a small, one hand, one button camera that’s shaped like a pipe or perhaps more accurately a periscope. It’s a far cry from the company’s smartphone range. The RE’s size makes it easily portable, and its distinctive shape will make it a talking point.

It’s packing a 16MP Sony sensor behind an ultra wide angle lens, it can shoot 1080p video and 120fps 720p slow motion video. There’s a big shutter button on the back, a secondary button on the front and a tripod mount, Micro SD slot and Micro USB port on the base. Oh, and it’s also waterproof to 1 metre for 30 minutes.

Best known for their smartphones, HTC says it’s letting its brand take a back seat when it comes the RE – literally, as it turns out. The only HTC branding on the camera is a small logo stenciled onto the back, while the camera’s own distinctive “Re” brand is front and center.

HTC wants the RE to encourage creativity in photographers. Its fisheye-style lens should ensure a distinctive look to photos and videos shot on the device (although that effect can be negated with software), and its size and shape means the RE can go a number of places your smartphone won’t (or shouldn’t).

The camera connects to your phone via Bluetooth, where an app (available on Android and iOS) allows you to get your pictures from it almost immediately and share them on to your favourite services. You can also manage backups and create Zoe highlight videos of your days.

While it’s not strictly an “action cam”, you can mount the RE on almost anything, thanks to a wide range of accessories that’ll let you do just that. Most of the accessories feature common parts – for example, the holder for the RE itself – with different methods of attaching it to things. There’s a clip, bicycle bar, suction and head mounts along with a car charger and a charging stand (which will be useful if you’re going to do time lapse videos). You can also get an extended battery (which also extends the height of the RE) and a protection pack (which includes lens and port covers along with neck and wrist lanyards). We don’t have pricing or availability information for accessories yet

We’ve been taking a RE camera out around Sydney for a little while now, and have a full Australian review of the camera coming right up!

Will you be checking out HTC’s RE Camera? Tell us your thoughts in the comments!

Keen to get one. Tried 3 Telstra shops in Brisbane city today. None had heard of it.