If you’re the owner of an LG G watch R, you might have noticed (or you might soon) that you’ve got a software update waiting. Ausdroid reader Dylan is one such recipient of this software update which takes Android Wear to version 5.0.1.

We haven’t yet seen it on our watches, including a Sony Smartwatch 3, but in all likelihood we’ll see these updates showing up soon around the traps.

Dylan has given us a few notes on what’s new in this version; primarily, the existing version of Facer no longer works (prompting users to update to a new version to keep it working), and there’s the ability to turn off the gesture-wake, allowing those of us who wave around a bit to get a bit more battery life from our watches. You’ll also find the ability for non-Google apps to be blocked (on the watch) from sending you notifications, instead of having to navigate through the companion app to do it; a welcome change for those of us who have too many apps installed and can’t be bothered to be proactive. 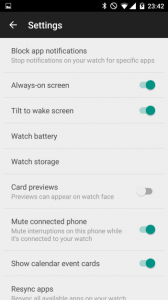 As you can see, the new version of the Android Wear companion app enables this feature, and offers a few more customisations as well, such as enabling (or disabling) the calendar event cards, and allowing card previews to show automatically or not. Another new feature, which will require Android Wear 5.0+ on your watch, is creating and setting custom watchfaces, which will now be part of the companion app.

If you’re keen to get the new companion app (and haven’t got it already via the Play Store) then you can download it below from APK Mirror:

Have you received the update on another watch? Let us know below.

Got it this morning. Woo hoo!

Still hasn’t hit my LG G watch. 🙁 Does it just happen or do you have to prompt it from settings?

boom. just got the update 2 minutes ago 🙂

Got it on my Samsung Gear Live on Friday 12 December

Yup, got the update yesterday arvo on my LG G Watch that I won from you guys 🙂

Still haven’t got it yet on my G Watch. I’m sure it’ll come anytime now.

It arrived this morning on my Samsung Gear Live

Got mine yesterday on my G Watch bought on the Play Store on launch day, pretty neat!