After being caught blocking Over-The-Air updates to all Nexus devices – even ones not purchased from them – Telstra has seemingly performed a backpedal, and is now allowing updates – at least the recently released Android 5.0.1 update anyway.

A number of Ausdroid readers (Adrian, Lester, John, Shano plus many, many more) are reporting that they are now receiving the prompt to download and install the Android 5.0.1 update. Apparently starting yesterday, many users were met with the prompt below advising them that the update was now available. 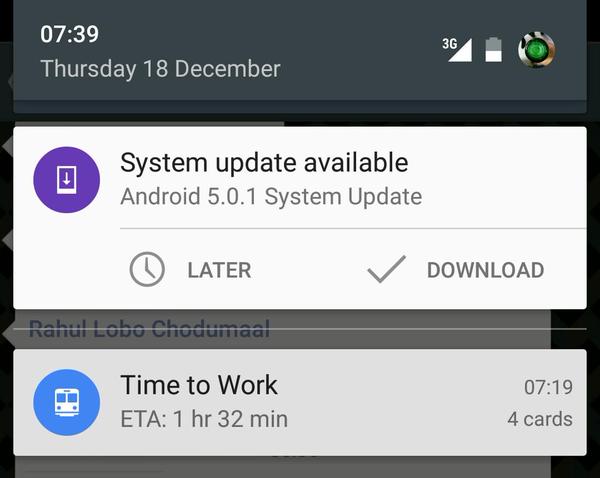 The majority of these users are reporting that they have side-loaded or flashed the Android 5.0 factory image on their Nexus 5 previously after Telstra blocked their original OTA, so it’s not certain if that particular issue has been resolved. At this stage too, it appears that only Nexus 5 owners are reporting the update has been received so we’re unsure about Nexus 4 owners who also seem to have been blocked by Telstra from receiving their update despite never having sold the handset.

We’ve contacted Telstra to ask for an update on the Nexus OTA update situation for the Nexus 4, 5 and now it’s on-sale the Nexus 6, but we’re still waiting for an official comment and will update as soon as we have something.

The Optus sim swap stopped working recently. I.e. if you use Nexus 5 still on 4.4.4. build from Telstra KTU84Q, it still not updating OTA. I do suspect this time round it is a Google “throttle” rather than carrier issue for pure Nexus devices.

I’m still on 4.4.4. If Telstra are able to manipulate the OTA update process, I’m suddenly highly concerned that they will be tampering with the update.

Why can,t OTA updates be received direct from the manufacturer rather than via a carrier, as most of us only update via WiFi anyway.
Do any of the apps need to be approved by the carrier?

I have also been waiting very patiently for the 5.0 android lollipop update. I am very disappointed as it has now been months. What is going on??

I’m on a bog standard nexus 5 bought from Play Store separately to the Telstra sim. Still stuck on 4.4.4 =(
Telstra is singlehandedly ruining the experience of owning a nexus device…

I received my Nexus 5 yesterday (wasn’t purchased from Telstra, Build No: KTU84P), I haven’t put any sim in it yet, As I haven’t cut my old regular sim into the micro sim yet, and I still haven’t received the 5.0 update, Still running 4.4.4 :/

A week later.. No difference

I have 5.0.1 on my nexus 6 with Telstra. It was offered the first time I turned my phone on.

Swapped my Sim a couple of weeks ago to an optus sim to get 5.0. And got 5.1 today without doing anything…. Ok so the ota upgrade has bricked my phone but I did technically get it……

My daughter got the 5.0.1 update on her Nexus 4 this morning. The same update showed up on my Nexus 5 this afternoon. Both were previoused updated from 4.4.4 to 5.0 using the sim swap method.

I think the title of this article needs changing to:

Telstra are now sort of allowing your Nexus update

This isn’t really a back pedal. The 5.0 update remains blocked over the air for the Telstra MNC and therefore blocks any subsequent OTAs. If users have side-loaded 5.0 that’s off their own back and Telstra wouldn’t have any obligation in that situation.

They haven’t asked Google to restrict 5.0.1 because access to it is already restricted through the previous exclusion.

If Android offered bundled OTAs (similar to Combo updates on OS X) which would enable updating 4.4.4 directly to 5.0.1, it would probably be restricted also.

Haventseena comment yet from someone getting the update from 4.4.4

I’m on Telstra and got my phone through Google. I pushed 5.0 onto my phone from my pc after the update didn’t come in. After I read this I forced an update check on my phone. 5.0.1 is installing right now. Thanks Telstra.

JUst got 5.01 TElstra OTA but i did a factory reset a couple of weeks ago without sim to get 5.0 on Nexus 5 (google Play)

I am still waiting for Lollipop. Still on 4.4.4 and looking at Goog+ and the Telstra crowdsupport site I am far from the only one …and Telstra reps continue to say that they are testing and it will be available early 2015