Motorola’s 2nd generation Moto G, dubbed the Moto G 2, appears to be the first non-Nexus (or non-Google Play Edition) device to receive the update to Android 5.0.1 Lollipop. The build shows up on the system as version 22.21.25, with build number LXB22.46-25. Obviously, Australian phones will show slightly different details when the update is received here. 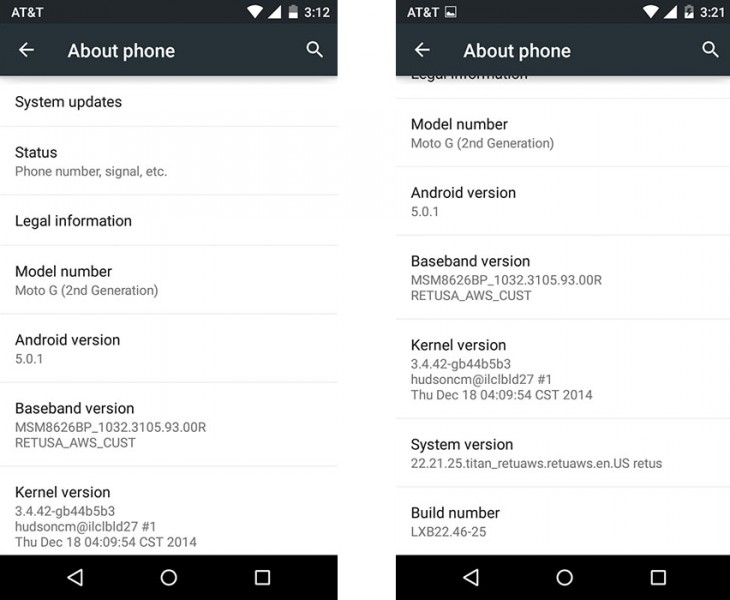 Rumours are also in the ether suggesting that the original Moto G is receiving a similar update to the same system and build numbers. If you’ve got the original Moto G, or if you’ve laid out recently for the Moto G 2, you’d be well advised to keep an eye on your system updates for a notification!

Thanks: Screenshots thanks to Droid Life.

Anyone here received a lollipop update to either the g or g 2nd gen yet?

Still no update yet on Moto G 2 bought from Good Guys 2 months ago. Happy to wait, but am hoping before Xmas.

Still waiting for 5.0 update for my original Moto G. 🙁

Phone is unlocked with a Telstra 4G sim.

How are you finding the X Mick?

X is fast, light and sleek. Nice bright, crisp screen. 5.0 is an unexpected bonus. No problems with Telstra 4G network. Not sure how I’ll go with only 16G, only 10G of which is available. This is my first non-Samsung smartphone, so I’m delighted with the thin Android implementation. I probably won’t even need to root it. I picked it up on GG eBay store with 10% off. Overall, very happy.

Yeah, the 16GB storage concerns me a bit but I’m more concerned about the screen burn in like the N6. Any signs yet?

Has anyone in Australia even received the 5.0 OTA update yet?

Hopefully we get a Christmas present from Motorola then.

any thoughts on how to speed the process?

I thought 5.0 had rolled out everywhere? I was hoping it had by Christmas to give to my sister.