Home Tablets, Laptops and Chrome You can now run crouton in a tab on the ChromeOS Dev... 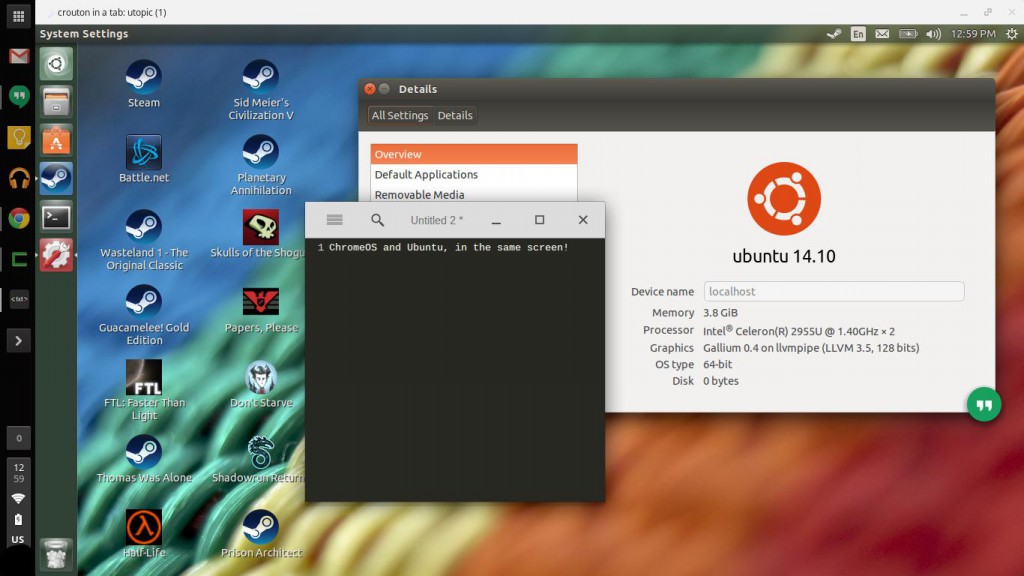 If you’re a Chromebook or Chrombox owner and use crouton, then things are about to get very interesting, with Crouton now able to be run in a tab within ChromeOS.

For those not familiar, crouton which is an acronym for ChRomium Os Universal chrooT envirONment, is a way for ChromeOS owners to run a full blown Linux install concurrently with ChromeOS. The crouton is an open source project maintained on GitHub, created and maintained by David Schneider, a Chrome Hardware Engineer at Google.

Previously to use crouton, you’ve had to switch between the two using a switch from the Crosh terminal. But, a recent merge into crouton will now allow you to run crouton in a tab within ChromeOS, as the above screenshot shows. The build apparently needs some work, as with any new feature, there’s some issues. 3D acceleration apparently isn’t working, but it does seem to be in development.

You can try it out yourself if you wish, but it’s only available on the Dev ChromeOS channel, if you’re interested head over to the crouton page and check it out.

Just a bit of clarification –
You have to be in ‘Development mode’ to install and run crouton but you can use it on any channel – stable, beta, or dev.

I believe that the article was referring to running Crouton within a tab rather than the Ctrl+Alt+=>(F2) to change between screens. For that functionality you need to be in the dev channel and be in ‘Developer Mode’.

Yes, Developer mode is required but not necessarily the dev channel – even for ‘crouton in a tab’.

Hmm, this could make a Chromebox a valid option for me.

Crouton in a tab is an amazing step forward …
For those who need to have USB connectivity on the go (e.g. a mobile printer) this could be the answer.

Very much agree, I used Crouton for a good year and it really made the Chromebook a solid platform to do everything I needed. It’s still a hard ask though for general consumers to enable scary boot screen, with it been able to wipe the entire SSD by pressing shift on start.

Not to mention for those in the Education arena, this opens up native SMARTBoard control and other features that the Chromebook has been viewed as being “too limited” for professionals (though as the IT Administrator I prefer it to a PC)