The next round of flagships will be unveiled in the coming months, with the ‘Hima’ now apparently the focus for HTC. Rumoured specs for the phone have been thrown around, but an entry in Antutu is now adding fuel to those rumours.

Overnight, Twitter leaker @upleaks, has posted a screenshot of an entry in the Antutu database. The phone will apparently stick with tried and tested tech for the screen, coming with a 5″ 1080P display instead of the better looking, but far more power hungry 2K resolution displays seen on other flagships of late. 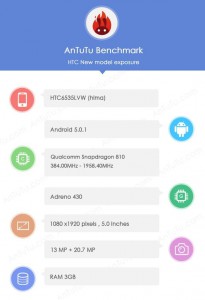 As you can see, under the hood will be a veritable powerhouse, with a 64-bit Snapdragon 810 chipset, which includes an Adreno 430 GPU. Also included will be 3GB of RAM which when paired up with the 64-bit architecture will make for quite the performer.

HTC have built on their camera credentials, including a 13MP ‘Selfie’ cam on the front, similar to what launched on the HTC Desire Eye. A 20.7MP Rear Camera will apparently be included on the rear, sounding the death knell for the Ultra-Pixel setup of HTC’s previous flagships.

Software wise the Hima will launch with Sense 7.0 based on Android 5.0.1 (Lollipop), when it will actually launch is anyones guess, but an MWC launch would fit with the yearly flagship cycle. As usual all of the above can be faked, so it’s a matter of wait and see, but these specs do look promising.

I swear the HTC gods have heard my prayers. I don’t want a phablet, I don’t want 1440p display (I thought 2014 1080p displays were fantastic and would prefer the better battery/performance) and I wanted the HTC One with a great camera. It looks like all my prayers will be answered.

If this is true, it sounds like an absolute kick-ass phone.

I just hope the 13 mp shooter on the front doesn’t take up as much bezel space as the eye.