It appears that the wait for Android 5.0 Lollipop might be over for Australian owners of LG’s G3 flagship smartphone. Ausdroid reader Jason Oakley owns an LG G3, and excitedly tweeted this morning that his phone has received the update to Lollipop this morning.

The phone Jason was using is an outright purchase from Kogan, and while the phone is used on Telstra, it isn’t (or wasn’t) running a Telstra firmware, meaning that there are no carrier delays to the phone receiving the update. You can see the system info screen below: 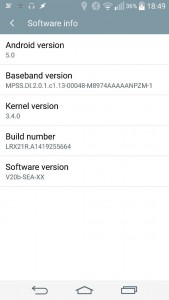 Have you got an LG G3 in Australia, and have you received a Lollipop update? Let us know in the comments so we can fill out the story with details of where the OTA is up to.

Update: We’ve had word from LG that the Android 5.0 Lollipop update is confined to overseas stock, which includes those handsets sold via Kogan. There shouldn’t be any carrier-sourced handsets receiving the update just yet. An LG spokesperson has confirmed, though, that LG is working with Australian carriers to push the update out, but there is no timeframe available yet.

I just brought a factory unlocked LG G3 D855 from Kogan & it came with Android 5.0 (lollipop) right out of the box 😛

Bought an LG G3 from Optus (bundled with a plan) about a week ago and was surprised when two days ago I was able to upgrade to Android 5.0 over the air. One annoying bug so far: can’t create a reminder in Google Now. I get the message: Reminder not set, can’t reach Google at the moment.

For those with the word ‘AUS’ in it, any idea when is the release schedule? 🙁

If you have the word ‘AUS’ in the software version then it will not matter if its bought in Australia, unlocked or even unbranded, it will not receive the over the air update to Lollipop like the LG G3’s bought from overseas. Kogan etc source their phones from other markets who are part of the Lollipop release schedule. Australia is not.

Nothing for me…bought my G3 outright in october from JB HiFi. Hopefully soon

Nothing for me yet, checked through both phone software update and LG PC Suite. Bought phone outright from Harvey Norman

Nothing showing up on and OTA check from my phone, but I’ve just plugged it into my PC and tried through the LG PC Suite and its currently downloading Lollipop. This is on a Optus branded phone bought through Virgin.

Kogan…unlocked…got it 🙂 Would be nice to have a Lollipop info sheet on the changes.

Does this version include the stock triangle/circle/square nav buttons?

I have the D855 purchased from Kogan, and the update turned up for me on Tuesday night. (running on Telstra fwiw)

Hong Kong online greymarket + Boost = a couple of weeks ago for my daughter.

My g3 got its update yesterday, im in nz on vodafone ,

my lg g3 is from optus unlocked using vodafone sim no 5.0 update yet

My mate who bought his G3 off Kogan has had the update for about 1.5 months now

Vodafone testing blog says it’s been scheduled – they did mention that it would be happening sometime towards the end of January via Twitter.

So were is Samsung’s Update, will we see it before the S6 is releahed

No update available yet for mine either. But then I’m with Optus….so will probably be one of the last ones to get the update 🙁

Optus are usually pretty good on the updates.

Nothing here either. Optus branded G3 from Virgin

D802 also has CM12 Nightlies which are running super smooth.

Any news on when LG G2 users will get Lollipop?

No joy yet. Mine is unlocked Australian stock from The Good Guys.

Sadly mind did not, unlocked from Good Guy 🙁