Samsung has announced a new addition to its Galaxy A line of devices in Galaxy A7. The company says it’s one of the slimmest Galaxy smartphones and comes equipped with premium hardware for a ‘superior social experience’.

The Galaxy A7 is a metal unibody smartphone that is 6.3 mm thick, helping it along to that ‘slimmest Galaxy smartphone’ claim. With a 5.5” HD sAMOLED 720p display, it’s also one of the largest devices in the Galaxy A series. 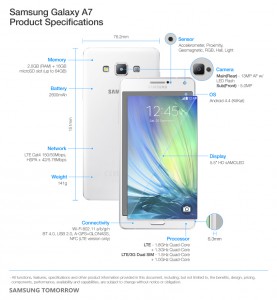 There’ll be two variants of the A7 – single and dual-SIM. Both feature LTE connectivity and Octa-core processors but the single-SIM version is powered by a 32-bit Exynos 5430 chipset while the dual-SIM version features the 64-bit Snapdragon 615 SoC. Both will see 2 GB RAM and 16 GB internal storage, expandable to 64GB via MicroSD card. There is also a 5 MP wide-angle front camera for selfie addicts alongside a 13 MP camera at the rear. additional specs include Wi-Fi 802.11 a/b/g/n, Bluetooth 4.0, A-GPS + GLONASS, NFC, microUSB v2.0 and a 2,600 mAh battery.

Front and back – White

Samsung says the Galaxy A7 will come with its Wide Selfie and Beauty Face shooting modes, allowing you to take selfies with ease. The rear camera can also be used for shooting selfies thanks to a new “Rear-cam Selfie” feature.

The A7 will run Android 4.4 (KitKat) out of the box – perhaps a little disappointing given Android 5.0 (Lollipop) has been available for a little while now.

Pricing and availability are yet to be announced or confirmed, however it is expected that the device will become available sometime later this week in South Korea. We’ll be checking with Samsung Australia to find out about any possible Australian launch.

What do you think of the Galaxy A line of devices? Does the A7 take your fancy? Tell us in the comments!

So the specs on the A7 is now considered “mid range”? Wow, how fast does technology progress…

An A7 WITHOUT TouchWiz would be a no brainer to buy.
With TouchWiz, no sale.

It takes about a minute to go to the Playstore and install Google Now or Nova or Apex or any one of a dozen other launchers and make one of them the default. Instant Google Experience device. Reboot and forget TouchWiz exists. Any Samsung phone any time – no rooting required. Sure you cannot actually delete TouchWiz but there is little harm in leaving it there inactive.

Evicting TouchWiz was not the object of my post. Merely avoiding it. With Google Now as the launcher and a Lollipop theme you would barely know you were not using AOSP Lollipop. Then in Settings-Apps-All disable all the Samsung stuff you do not want and replace with Google or other from the Playstore. It is like having a new phone. The Samsung apps are still there taking up storage space but then all phones have stuff like that. I hack phones all the time and my own phone is running real AOSP Lollipop. But for a lot of people that… Read more »

I honestly don’t think you’ll ever find the right phone.