Razer, known mainly in Australia for their high quality gaming accessories, will be branching further afield in 2015. RazerZone representatives confirmed to Ausdroid that they intend to launch the Forge TV and their Nabu and Nabu X smartbands in Australia this year.

The big news for most people is that possibly the first standalone Android TV box to launch in Australia might not be the Nexus Player, but instead could be the Razer Forge TV.

The Razer Forge TV will run Android TV, so it will offer the ability to stream Movies, TV and Music, as well as play Games and Apps from Google Play (or Plex). You’ll also be able to cast content from an Android (or iOS) device using the Google Cast protocol and Voice Search will also be on offer via a remote app that can be installed on your phone or tablet. 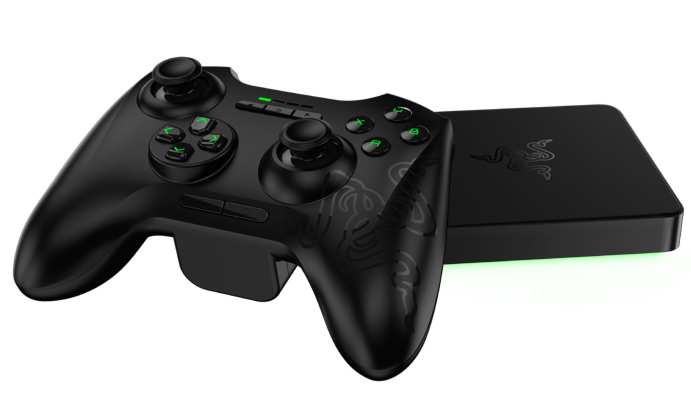 Razer will also be offering a range of accessories for the Razer Forge TV. Forge TV can support up to four bluetooth based Razer Serval gaming controllers, as well as the Razer Turret – a wireless living room gaming mouse and lapboard. The Razer Turret connects using Bluetooth 4.0 LE or Wireless 2.4 Ghz and offers lag-free playback.

While Razer has confirmed that their Android TV box will indeed launch in Australia, they don’t yet have a date or a price. EB Games however does have a listing for the Forge TV, but it appears to have a placeholder price and release date ($159.95, and 2016).

While Android TV is a big move, Razer also intends to offer their smartbands in Australia.

The focus of the Nabu and Nabu X smartbands is the ability to deliver notifications from your smartphone to your wrist, something which enables gamers to keep their eyes on their game rather than their smartphone. The bands also offer sleep, step and calorie tracking.

The Nabu X is the lower end version of the two bands. It offers three coloured LED indidcators and a vibration motor to notify you of alerts from a paired smartphone. The Nabu meanwhile offers an OLED screen which displays short text previews of notifications from your phone.

Both bands will deliver Texts, emails and app alerts, as well as interface with third-party developed apps from their proprietary Nabu Marketplace.

Razer hasn’t priced their smartbands for the Australian market ‘officially’ as yet, but we do know the US pricing: Nabu X will sell for US$49 when it launches, while the Nabu with its OLED screen sells for US$99.

EB Games is currently listing the Razer Nabu in Medium and Large for $149.95. The Nabu X isn’t listed as yet.

The Nabu X will be available in Black, White and Green colours, but Razer hasn’t advised any colour options for the Nabu when it launches.

We’re talking with Razer as the launch approaches and hope to bring you confirmed pricing and availability for their smartbands and Forge TV as soon as we can.

Are you interested in the Nabu or Nabu X – or is your eye on the Forge TV? Tell us in the comments!

“will be branching further afield in 2015”

since its being released in Q1 of 2015 how is it Australia doesn’t get it for almost a whole year?

its main focus is razer cortex pc streaming. android gaming is just a side since the platform is android base.

Makes me think of Naboo from The Mighty Boosh.

Can anyone who has one comment on the utility of these sideways displays on fitness bands? They look terribly awkward to me.