The phone which appeared at the FCC has been certified with four models – PM0850 through PM0854 – and while there’s no ‘Xperia Z4’ labelling, XperiaBlog is theorising that the phone is the Z4 based on the software build. Xperia Blog has done some detective work and sees the 25.0.A.0.33 firmware on the phone, which is greater than the expected Lollipop build for the Z3 (23.1.X.X.XXX) as proof that the phone is the Z4.

There’s not much information publicly available about the phone in the FCC documents, but there are LTE bands 2, 5 and 7 listed in the documents. As well as LTE the documents list 3G and 2G bands and there’s also Dual-band Wifi 802.11 b/g/n and Bluetooth. There’s also a picture of the label location for the FCC certification. 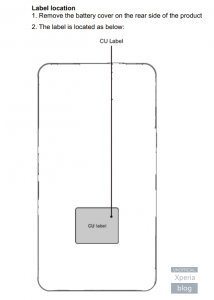 If indeed these phones hitting the Japanese certification body and the FCC are the Xperia Z4, a launch at Mobile World Congress is likely. Hopefully we’ll see more on the Z4 soon.

Saw this before, but was wondering about the text “remove the battery cover on the rear side of the product”.

None of the Z series have a removable battery, for the waterproofing of course, so I wonder if this is just a generic statement that goes with their submissions…

keen for the z4 to come out so the z3 compact price drops a little. 🙂

I am curious as to how they will upgrade it.
The Z3 was basically a neatening of the Z2. Not that much of an internal upgrade. These phones don’t lack much on hardware. A slightly newer Qualcomm chip doesn’t matter much.

I would love it to be the mythical camera-phone. That might push me into buying.

Most likely camera upgrade. Adding OIS to the camera, bit better CPU, maybe 4GB of RAM (or 3GB at least) and hopefully a bit bigger battery, even though the Sony Z series has been excellent on battery, a bigger battery would never hurt!

I’m learning towards a Z4 as my next phone!

I hope they don’t follow the trend of bigger screens and QHD, or if they do, hopefully they still release another compact version.

OIS on the other hand, is an excellent trend to get behind!

Same…. I would forgo QHD any day to have all day battery life!