Stan, the new streaming television and movie service with a friendly name from StreamCo – itself a partnership between Fairfax and Nine Entertainment Co – is nearing launch. Trial subscription offers have made their way out to Fairfax subscribers and some members of the public who signed up to receive launch information from the company over the last few days. 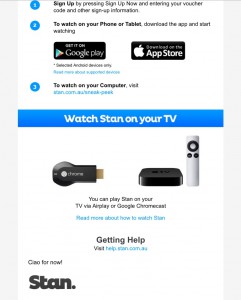 The trial offer email indicates that Stan will support Google’s Chromecast and Apple’s AirPlay at launch, making it easy to get content to play on your TV. A number of Australian broadcasters and media streaming companies still don’t properly support both of these options.

On the movies front, the big push at the moment is for the James Bond collection, thoughtfully separated by lead actor in the Stan catalog. There’s also 21 Jump Street, The Matrix movies, The Hobbit and Lord of the Rings, Twilight, Robocop and Terminator films alongside Australian product like Wolf Creek (though no Wolf Creek 2) and Chopper.

Stan’s also quite proud of its kids selection, and you can set up multiple profiles on the same account to ensure your kids only get to see age-appropriate TV and movies. There’s a decent number of old-school and new-school kids shows ranging from preschool to tweens including Dora the Explorer, Octonauts, Inspector Gadget, iCarly, Teenage Mutant Ninja Turtles and Penguins of Madagascar (the series, not the new movie).

A monthly subscription to Stan will set you back a fairly wallet-friendly $9.99. The service is expected to launch fully next month. There’s an impressive launch catalog, although there’s a few notable omissions – franchises like Planet of the Apes, Transformers, Shrek, Madagascar and How to Train Your Dragon are nowhere to be found and output from some studios like Disney seems to be missing entirely. Some shows like Doctor Who also seem to have a limited number of seasons available. It’s early days yet though, and we’ll have to see how frequently Stan adds content to their catalog – or removes it.

You can get ready for launch by downloading the app from Google Play now, although device compatibility seems a little off – Sony’s recent Z3 series devices aren’t supported, along with Motorola, HTC and Huawei devices. There’s a reasonable amount of support for Samsung phones and tablets though, and while the app could be installed on the Nexus 9, no videos would play (though the Chromecast worked just fine). A couple of users with rooted devices have also complained that the app won’t work for them.

If you’re lucky enough to hold a trial subscription and have a supported device, you can get a head start on the available content. Otherwise, head over to stan.com.au and sign up for updates.

Have you checked out Stan? Tell us your thoughts on the new video streaming service in the comments.

Yeah, it does not work on rooted devices, I sent an email asking about it and got this response:

“Stan will not work on rooted/jail broken devices. Digital Rights Management laws which are in place do not allow us to extend the use of Stan to such devices.”

Hopefully these laws get looked into as Stan launches and Netflix arrives here as I would assume they would have the same issue.

The question that immediately comes to my mind is whose DRM Laws are Stan enforcing against legitimate Australian Android users?

Pity their client flags my stock nexus 7 (2013) with lollipop as rooted. Guess I wont be trying out their service.

Thought I would add that it really doesn’t affect me much at all as I wouldn’t watch stuff on my phone, I just wouldn’t watch something on such a small screen but I would use it to control my chromecast. So not a huge impact to me but like to put it out there as people obviously do watch media on their phones.

There is a very easy way to bypass this root check…

Fairfax and Nine better sort this out before launch or there will be much fist-shaking.

Got my invite today and just signed up. Will check when I get home tonight and see what it is like.

Lol, idiot, you shouldn’t have rooted then. You’re the minority.

“you shouldn’t have rooted then” said no one (else) ever

What an original, never used before comeback.

Yup completely my fault for taking a new nexus 7 out of the box, updating to lollipop with the automatic ota and trying out Stan. Oops wait you’re running a rooted device, no content for you.

If it doesn’t work on rooted devices than I’m not interested. Root is a must on Android devices for me

Why are they idiots for not allowing rooted devices to use the service? Just remember the vast majority of Android users don’t root their devices (myself included), and they need to at least tell the media provider companies that they are doing what they can to prevent copyright infringement?

So if I root my device to take advantage of insanely useful apps like Tasker, I’m immediately a copyright thief?

Absolutely not. Way to deliberately miss the point!

It’s their app. They get to choose who uses it.

Given the state of studio agreements, the fact that root access in no way compromises DRM access on any device that actually meets the requirements for the HDCP component of the HDMI certification, this decision by Stan is laughable and the justification for it offensive.

I say this as someone who develops Android firmware for STBs used exclusively for playing content from the same studios as Stan. I dare say our contracts are stricter than Stan’s and their parent company, we don’t have anywhere near as many screens to bargain with.

One year later, and I’m waiting for Ben’s response…

The problem, Ben, is that the copyright buyers and content distributors are actively going out of their way to treat such legitimate
end consumers as criminals, without allegation; or trial; or proof; or even
circumstantial evidence, merely because such a consumer has a need to
have root access on their Android device.
Now what do you think such consumers are likely to do in response and retaliation to being treated as a copyright thief, when the consumer has NOT even attempted to access copyrighted content without paying, much less actually accessed copyrighted content without paying?

Please people, if you’re going to disagree with my argument, address the argument for what it is, not what you think it is. It has nothing to do with copyright or treating people as thieves.

By doing ‘No APP for you!’ merely because a legitimate end consumer has root access on their Android device, and then passing off the app access block as preventing copyright infringment, the copyright buyers and content distributors are actively going out of their way to say that such legitimate end consumers are criminals, they just have yet to actually attempt to commit a crime, or actually do so.

Alright. I disagree with most of that but that’s fair enough 🙂

Also, Stan may actually have other reasons to prevent root. I simply went with the first reason that came to me. I’m sure there are other reasons, and I stand by my statement that I don’t believe they’re idiots for doing it. And if I’m wrong, well, it’s just an opinion. Now excuse me while I watch some streaming 720p content 🙂

Anyone experiencing halts and freezing should look at a better router. Dual band with 5Ghz should do the trick.

For those with a Chomecast this wont help as it only does 2.4Ghz. Tweaking with the WiFi channels and trying to minimise interference is probably the only thing that can be done in this case.

Basic things like keeping the Chromecast as close as possible to the router and having a decent router to begin with would also help.

I’ve had no issues with streaming to the Chromecast with multiple streaming services so it can definitely be done well with a bit of knowledge.

Stan wouldn’t cast any movies to my nexus player, but worked on a regular chrome cast. With a few pauses and halts sometimes.

Are the pauses and halts due to Stan or Chromecast, do you think?

Device compatibility issues is poor form for an app like this. Still going to go with Netflix (local or US).

Poor form. Netflix, iPlayer, Hulu all work on my Sony phone. Not sure I can stretch to another streaming service, but if Better Call Saul is available the same time as the States, I’d be interested.

I signed up months ago and been getting emails from them but sadly no invitation to trial. Poor me 🙁

Told me i wasnt authenticated.

What the actual fuc*?